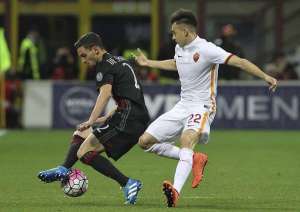 Roma have reportedly come to a decision regarding the future of Stephan El Shaarawy and will keep the Italian at the club.

The 23-year-old originally joined French club AS Monaco last summer but was returned to parent club AC Milan in January, only to be promptly loaned out to the Giallorossi and Il Faraone seems to have finally found a home.

Following impressive displays at the capital club, Luciano Spalletti’s side will exercise their €13 million purchase option, as reported by Italian newspaper Leggo.

El Shaaraway is also believed to be keen on remaining in Rome, where he has featured in 16 league matches, scoring eight goals and adding two assists.

The versatile winger has been a key figure in the club’s resurgence over the second half of this season, as they finished the campaign unbeaten in 17 Serie A matches.