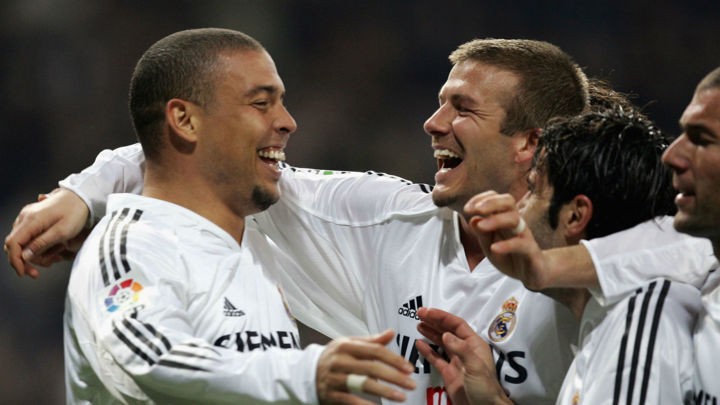 Ronaldo has declared David Beckham as one of the best players of all-time as the former Real Madrid team-mates recalled their time playing together.

The Brazilian and Englishman were both part of the famous Galacticos' side between 2003 until 2007.

Beckham moved to the Santiago Bernabeu in 2003, one year after Ronaldo had transferred to the club from Inter, with the striker doing his bit to make the Manchester United prodigy feel welcomed in Madrid.

“One of the first people that I ever saw was you,” Beckham said to Ronaldo over Instagram Live. “When you walked into the changing room it made me comfortable to be in the club.”

That warm welcome would be repaid by Beckham, with his work in midfield not going unnoticed by the Brazilian.

“Man, you are amazing,” Ronaldo said. “For me, you are one of the best of all time in the centre.

"The way you would touch the ball, the way you could get the ball wherever you want, and without looking at me. I should thank you for many balls you gave to me.”

Despite Real Madrid boasting two of the game's greats at the same time, the side would win just two trophies while Beckham was at the club.

Since hanging up his boots, Beckham has become the owner of new MLS franchise Inter Miami with the club's inaugural season interrupted by the ongoing coronavirus crisis.

“It's difficult times. You know, I think with Inter Miami, this was the first season. We played two games so far. We haven't played a home game yet in our stadium," Beckham said.