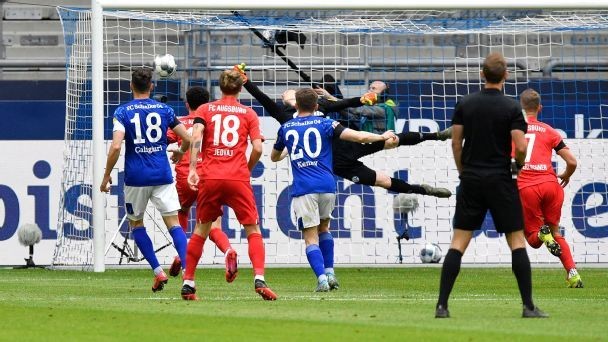 Schalke slumped to a shock 3-0 home loss to relegation-threatened Augsburg on Sunday, their fourth defeat in five games dropping them to eighth place in the Bundesliga.

Augsburg's Eduard Lowen curled in a sensational free kick from 23 metres in the sixth minute and Nigerian winger Noah Joel Sarenren-Bazee slotted home in the 76th before Sergio Cordova added the third in stoppage time.

Schalke, now without a win in nine league games, slipped down to eighth place on 37 points while Augsburg's first victory after four straight losses lifted them to 12th on 30, seven above the relegation playoff spot.

Bayern Munich lead the standings with 61 points, four ahead of Borussia Dortmund whom they face on Tuesday.

The Bundesliga became the first major sports league to resume last week, with no fans in attendance, after being suspended for more than two months due to the COVID-19 pandemic.