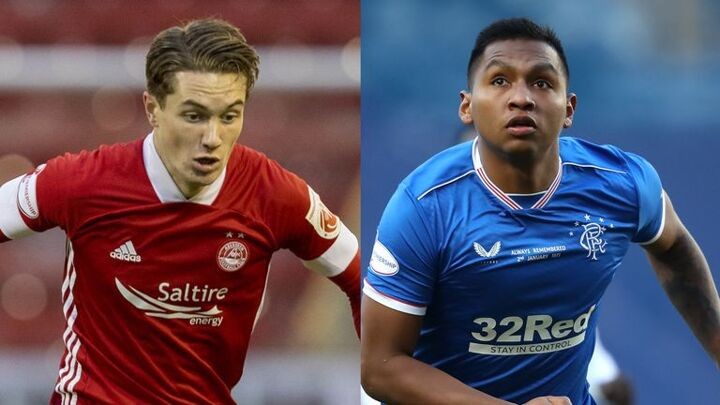 Aberdeen's Scott Wright would be a "good fit" for Rangers, according to the panel on the Sky Sports Scottish Football podcast.

Aberdeen boss Derek McInnes says Rangers are interested in signing Wright, who is out of contract at the end of the season and has yet to agree terms on a new deal at Pittodrie.

Steven Gerrard's side could offer the 23-year-old a pre-contract now but Sky Sports News understands they are looking to do a deal in this window.

Ian Crocker was joined by Andy Walker and Kris Boyd to discuss the latest Scottish Premiership action, as well as a return to form for Alfredo Morelos as his goals in Rangers' 2-1 win at Aberdeen gave them a 21-point lead at the top of the table, though Celtic have three games in hand.

Why Wright is a good fit for Rangers

"I like his sharpness, his ability on the ball, his close control. I think it's a measure of some really smart business from Rangers, who I must say for so long were a bit of a laughing stock with some of the players they were signing.

"There is a real structure and thought process given now to bringing in players at Rangers. Glen Kamara from Dundee, £50k, what a steal he has been. Joel Aribo, a development free from Charlton, the two of them sit alongside Steven Davis so well, and it's a really comfortable midfield.

"I think Scott Wright will do well with better players around him. You always wonder about someone who has extra demands thrown on him to be much more consistent than he is at Aberdeen.

"But Kamara has shown some players react really well going from a smaller club like Dundee. Aberdeen are obviously a bigger club, with more of a winning mentality, but I think Scott Wright will do well at Rangers."

Boyd on Wright: Take the opportunity

"If you look at the way Rangers play, I think he fits into that. He's not an out-and-out wide player, hugging the touchline, he comes in and looks to place, becoming that false striker in behind the main striker.

"That's the way it suits Wright - he's definitely someone who has shown he probably has got a step in him. It's a big step, of course, playing under pressure every single week.

"I know you are under pressure at Aberdeen, but it's not the same as scrutiny as the Old Firm. He's played all the age groups for Scotland as well, so there is a talented footballer in there, so I just hope he goes to Rangers and kicks on.

"Once again, it's a young Scottish player being given the opportunity to make that step up to a big club. I hope he realises that opportunity and grasps it with both hands."

Morelos stay a blessing in disguise

"He was back to his best on Sunday at Aberdeen. Two magnificent finishes, real striker finishes. A lot of his play this year has been outside of the box, maybe he's trying to develop himself in other areas, but be that main striker, get yourself in the box, there are players that will make those opportunities. He does not need to drop back and do it himself.

"Rangers need someone to score on a regular basis. Kemar Roofe will probably miss a few games, and we have spoken about how Rangers' main strikers have not scored the number of goals you would expect from a team as dominant as Rangers.

"Morelos' performances have not been at the level he's set from last season, but if he has a big run, you would expect Rangers to go and stretch that lead further from 21 points.

"Obviously the move did not materialise for him in the summer, and it's probably been a blessing in disguise for Rangers, in terms of competition for places, with other players stepping up."

"The timing is perfect for Morelos. He looks as though he's got his hunger back. It's Morelos at his best, particularly the first goal, with a one, two-yard movement off his marker, keeping the effort low.

"If he's back on form, Rangers have got someone who is going to score on a regular basis again."

"I'm delighted with him because something seems to have changed in the last couple of weeks. He is training ever so well, he seems happy, maybe that's because he's playing more and feeling sharper.

"His performance has come on the back of him working really hard. We need him firing from now until the end of the season. If we do, it will certainly be a big help to us.

"I felt he played closer to the goal on Sunday than previous - when you are lacking that confidence you sometimes play further away from the goal. Credit to him, outstanding, and he deserved man of the match."