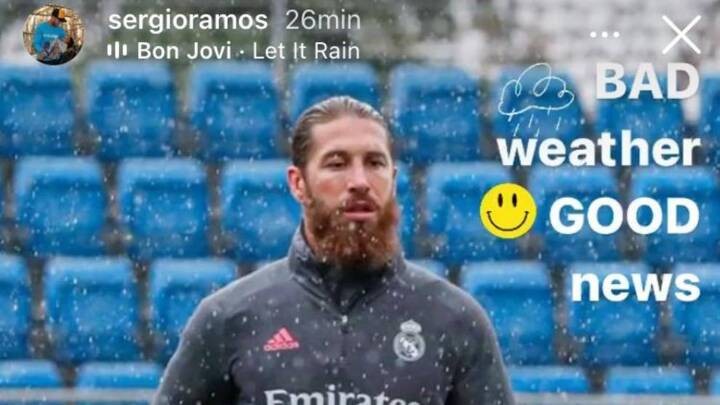 Despite still being out of action due to an injury, Sergio Ramos is optimistic as he showed in his latest post on social media which showed how he returned to the training field on Friday.

With rain covering the city of Madrid and Real Madrid's Valdebebas training ground, Ramos posted to show how happy he was to be back outside.

It comes after the Real Madrid captain suffered a muscle injury in the final game of the international break, Spain's historic win over Germany, where he was forced off in the first half.

The injury was a hamstring strain was initially expected to rule him out for between one and three weeks, with over a week having passed since then.

He has been left out of Zinedine Zidane's squad to face Alaves on Saturday night, with Raphael Varane, Nacho and Eder Militao providing other options in central defence.

Ramos' aim is to be back in action in time to face Shakhtar Donetsk on Tuesday, although the message could also be interpreted in a different context.

It may be related to his ongoing negotiations for a new contract to keep him at the club and extend his time with Los Blancos, with an agreement reportedly close.

Zidane spoke about Ramos in his press conference ahead of the clash with Alaves, explaining that he feels good but that the club's management do not want to take any risks.

The defender has already missed games against Villarreal and Inter, but it provided an opportunity for Varane and Nacho to prove that Real Madrid can get by without their leader against the Italians.

Their strong and reliable performance meant that Zidane and his team can relax safe in the knowledge that there is no need to rush the 34-year-old ace back into action.