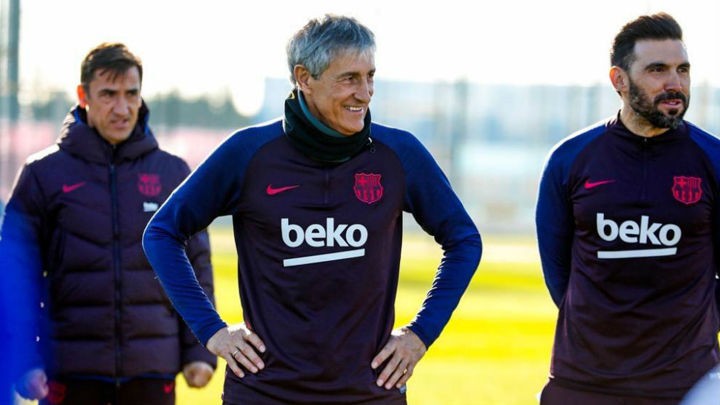 At 61 years of age, Quique Setien has been given the opportunity to sit on the bench of Barcelona, the club to have inspired his whole approach to coaching.

He's taken his philosophy from watching Johan Cruyff's Barcelona, which is why the Catalan club have appointed him as Ernesto Valverde's replacement.

Along with him, he's brought a very capable team of coaches with whom he worked at Las Palmas and Real Betis.

Eder Sarabia (39) is his right-hand man.

The pair have a relationship that goes beyond their professional life as Setien and Eder's father, Manu, had a good relationship in the 1980s when their respective playing careers were ending.

Sarabia is Setien's voice in both training and matches.

He carries the weight of the sessions and is responsible for giving those sessions intensity.

Soto worked with Setien for six seasons in Galicia and, after he moved on, they reunited at Las Palmas.

The Setien-Sarabia-Soto trio added a fourth member during their time at Real Betis by bringing goalkeeper coach Jon Pascua (47) on board.

Pascua played for Real Zaragoza, Alaves and others in his playing career.

His approach focuses on expanding his goalkeepers' knowledge, working on all kinds of situations with an intense rhythm.

Setien has brought a very complete team with him and they are a unit who think about football 24/7, obsessed with using the ball effectively.