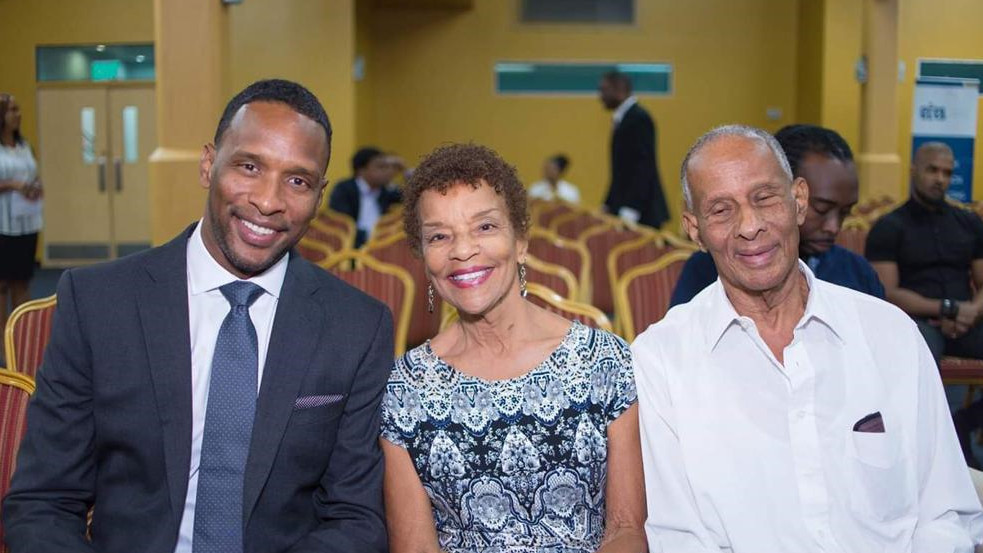 Shaka Hislop is a founding member and honorary president of Show Racism the Red Card, a UK-based anti-racism education charity founded in 1995. A graduate of Howard University, Hislop played professionally as a goalkeeper for Reading, Newcastle, West Ham, Portsmouth and FC Dallas. He played internationally for Trinidad and Tobago international, representing his country at the 2006 World Cup. He now works as a pundit on ESPN FC Daily and hosts a new ESPN+ series, in which he and guests discuss racism in soccer and beyond.

My father was part of the Windrush generation and moved to England from Trinidad in the mid-1960s. One night, he and a friend were arrested by two white police officers, who planted a bunch of keys on them and started breaking car windows. They successfully sued the London Metropolitan Police for wrongful arrest and, with his part of the settlement, dad went back to Trinidad, met my mother and went through law school.

What I learned from my father was that, though the system wronged him, he got involved in trying to make it better. He became a lawyer, a judge, a part of the judicial system in Trinidad. Years later, those life lessons led me to get involved with Show Racism the Red Card. I was playing for Newcastle at the time and began going into schools to talk to young people about our cause.

Looking back 25 years, the language used around social justice was understated and soft, a reflection of how you had to phrase things, how you had to put things across. Back then, you were seen to be speaking out.

Today you can be more direct in what you have to say. Today, there is greater willingness from people, regardless of skin colour, to hear what we have to say. That reflects a greater understanding, but there is so much more to be done.

In February 2018, TV host Laura Ingraham said LeBron James should "shut up and dribble," which reflected what we had been told and what we had been doing for generations, with zero positive impact. LeBron's response effectively was to say that, while we will keep dribbling, we will not shut up and will use our platforms to push for equality and social change.

However, the shooting of Jacob Blake showed that, for all the protests, all the marches, all the kneeling, all the efforts, there was no change, so the next logical step for us as athletes was to stop dribbling. That is why in several sports athletes recently stopped playing as a form of protest. We must be prepared to take similar and meaningful action again. We owe it to our communities and to each other. We owe it to equality and to all of those who continue to be devalued.

What happened to Blake and to George Floyd made me angry. I know the statistics, my father lived it, but this somehow felt different. I tried to avoid watching the Floyd video for a long time. I was trying to figure why it impacted me in the way it did. My eldest daughter recently turned 24 and my son was 13 a few weeks ago.

They are facing the world on their own and having to deal with these incidents. When you are a parent, you think you can protect your kids from these things. When I started with Show Racism the Red Card, I genuinely felt like I could change the world. Some 25 years later, I feel as though I have let my children down; I did not deliver on that promise.

Now they have to go out into this world and, as a parent, you worry. Where do they go? What are they getting up to? What happens if they are pulled over by the police? My wife spoke to my son about what he has to do and how he has to behave and, just because his white friends do something, that does not mean their experience will be the same as his. Having that conversation with him at age 12 was tough.

When I walk into a department store, I always stop and look at the camera so they have a full picture of my face. I might walk around looking at nothing in particular, but I want to say that I have got nothing to hide; I'm not here with anything suspicious in mind. Things like that and keeping your hands visible might seem small, but they help explain what being Black in today's society means.

In March, my family and I took part in a Black Lives Matter march in Boston. It was early in the pandemic so there were health concerns about taking part, but we took precautions and we felt so much better for participating. We were a part of the group -- we were not leaders and just joined in the chants -- and it felt much bigger than ourselves. It was uplifting to me, as someone who has been involved with a similar campaign for most of my adult life, to see the youth, the diversity and the energy in that crowd.

Players are speaking out, getting involved

There is a lot of risk in speaking out and you will be criticized, so I am full of admiration for the actions of Raheem Sterling, Weston McKennie, Jadon Sancho and others; players willing to put everything on the line.

If you do want to speak out, be honest. People respect and will respond to that. Recognise your target audience and find a unified voice; too often campaigns get lost in the vastness of the internet and drown each other out.

Not everyone is comfortable speaking in public or into a camera, though, which is why I am never critical of players who are not as vocal. To those in that category, look for other meaningful ways to support social justice. Financial contributions are one way, but joining in a march can be as important to extend the message that starts with kneeling before games, T-shirts and hashtags.

Many clubs already do great things in their communities, while Show Racism the Red Card volunteers go into schools and judge art competitions and essay-writing contests. Sometimes, being there and showing support takes no more than your presence.

I know from my own experience that you spend so much time on your craft -- and maybe you have a family at home -- so they become your focus and it is tough to convince them to come out for after-school programs and deal with rush-hour traffic, but players need to make more of an effort to be involved, even if it is once a month or every two weeks.

What players can do is not just support, but drive what is being done. Whatever the issue is that is most important to you, showing up can have an impact. Football has started the conversation and raised awareness. It is the responsibility of players to continue that.

QPR chairman Les Ferdinand speaks about racism in football in the latest episode of "Show Racism the Red Card" on ESPN+.

What can be done at the top level?

As I was coming to the end of my career, I took courses to earn my coaching badges, but other Black players felt there was no point because they would not get interviews for open jobs. That always stayed with me. Many might consider going into coaching, but here were some incredibly talented footballers, who had seen it all and won it all, who refused to take that next step because they felt they would be overlooked for a backroom staff role or as a youth team coach.

The Rooney Rule, which was established in 2003 by the NFL as a policy that required teams to interview minority candidates for coaching positions, is a step toward dealing with the perception that many Black people in the game have; it would at least increase the pool of candidates and get more feet in more doors.

I do not believe that clubs or leagues should be told they must have a certain numbers of Black managers or assistants, but I do think that, at academy and youth team levels, for example, there can be a certain number. From there, those who do well will get more opportunities; that is how the pipeline can work effectively.

If there still is no great change, the conversation should be revisited, but this would at least be a start and could benefit the game as whole; beyond coaching and management, the knock-on effect could be more opportunities for Black people in boardrooms and front offices, at clubs and on league and national federation executive committees.

Players from the Premier League have shown their support for social justice in a variety of ways. GettyFootball as a uniting force

As the most popular sport in the world, football is full of people who understand the game's power and try to use it for their own means. One example of a competing agenda against social justice is the argument that there are few other occupations in which Black people can make so much money. Using that to discredit the anti-racism movement is very disappointing to hear and counterproductive to everything I believe.

Football is the perfect vehicle to drive anti-racism issues. Where else in the world is it possible to find someone from Trinidad and Tobago sharing a dressing room with someone from England, from Ireland, from Colombia, from Belgium? And all going out on the field on a Saturday, having to have each other's backs. When I play well, I have to uplift somebody else and, when I am not, I know I can rely on someone else to carry my own burden. We all come off the field with the same result; where else can you get that? To me, that is the foundation of why sport is uniquely positioned.

Marching in Boston reminded me that this is about more than Black Lives Matter; it is about human rights and how uplifting one cause can benefit others. Just being involved is incredibly empowering and as much as the focus always falls upon the basic initiatives and their leaders, the lifeblood is in the people who simply show up.

They say that "a rising tide lifts all boats." My message to those who love the game is simple: Whether you speak out or stay silent, show up and be a part of the movement.