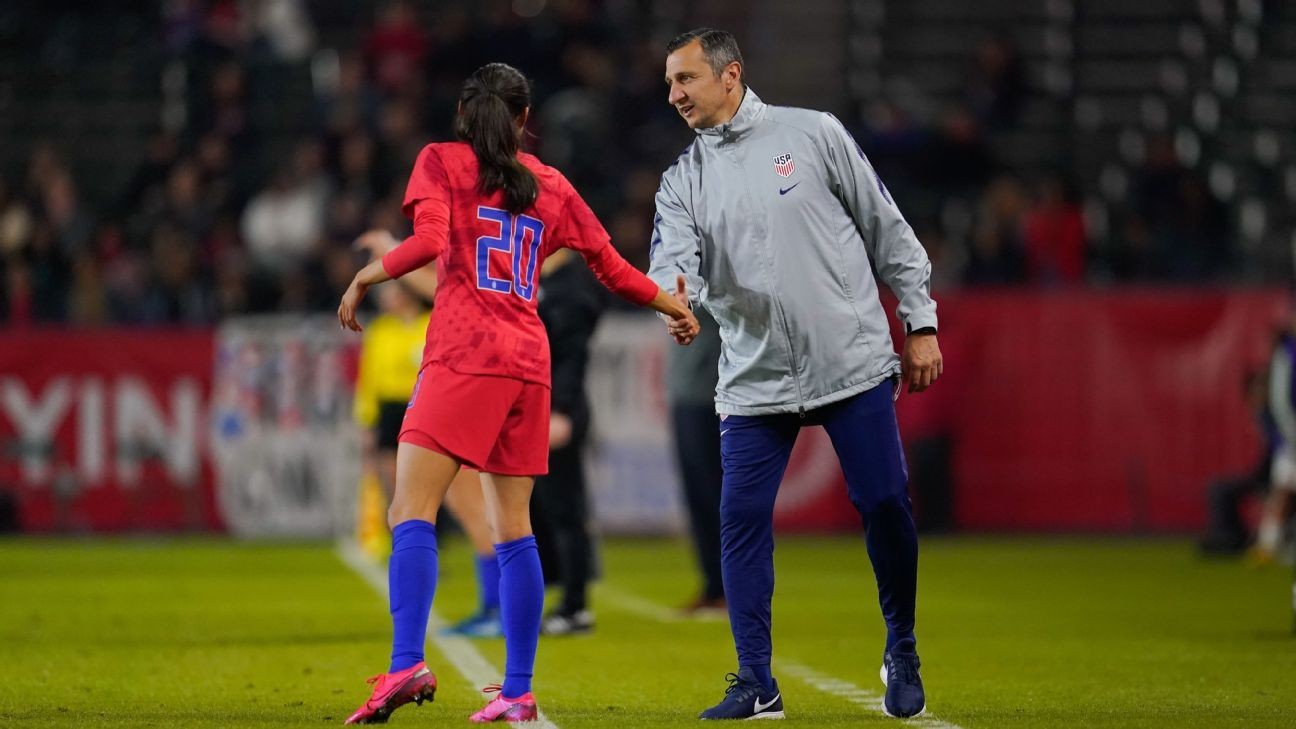 Over the past year under head coach Vlatko Andonovski, the names involved have been more prominent, and the answers have been more difficult as he transitions a new generation of players into the team. Even as additional players earn call-ups, fans and pundits have questioned the absences of both youth and veteran names -- everyone from World Cup-winners like Tobin Heath and Christen Press to up-and-comers like Mia Fishel.

The 2023 World Cup is less than a year away, which raises the question: Is there room for everyone who might deserve a spot?

No, is the short answer. That is how a World Cup roster works, especially for a perennial world power like the USWNT.

The initial roster for this international window, when the U.S. will play Nigeria twice, was the exact group that won the CONCACAF W Championship qualifying tournament in July, which the USWNT won, minus an injured Emily Sonnett. A couple of replacements have since been made, but the message is clear: this is the core group working toward next summer, when the USWNT will try to win an unprecedented third straight World Cup.

Why USWNT legend Heather O'Reilly came out of retirement for an amateur team in Ireland17hGwendolyn OxenhamUSWNT celebrates equal pay with trailblazing new collection8dDan HajduckyWhy the USWNT without Alex Morgan was an absurd idea44dGwendolyn Oxenham, special to ESPN

Only seven players on the USWNT's official 23-player roster for the games against Nigeria were on the 2019 World Cup-winning squad. Kelley O'Hara (who would have been the eighth) was replaced on this roster due to an ongoing injury, and several other players who were on that 2019 squad are out with major injuries.

Hailie Mace, a versatile player who frequently features at wing-back for the Kansas City Current, replaced O'Hara on the roster for her first call-up in over four years, and National Women's Soccer League rookie of the year candidate Savannah DeMelo replaced Trinity Rodman, who will miss out due to a family commitment. Those additions reiterate that club form matters, which Andonovski has said since he took the job nearly three years ago. Yet they also suggest there are still opportunities to crack into the squad that will ultimately go to the World Cup.

Vlatko Andonovski has turned the page on the USWNT roster, and that means players like Christen Press have found themselves without a spot. Brad Smith/ISI Photos/Getty Images

Conversely, the decision to stick with the exact group from qualifying last month is a clear indication that the pool of players being considered for the World Cup is narrowing.

"We did decide to stick with the same roster of players that were with us because we were very happy with the level of play that those players displayed when they are in our environment," Andonovski said. "And that's why, going forward obviously, we're going to see a lot of these players coming back if they continue to stay in the form that they are in."

Every U.S. training camp and game, in addition to every club match, is a "tryout," Andonovski said. Implicit in all his comments over the past several months is that anyone currently outside of the group must do something special to disrupt the depth chart, and nowhere is this more apparent than at the forward position.

Prominent absences from the core group of the past decade include Heath and Press. Neither player has featured for the U.S. since last fall. Heath is still working her way back to consistent minutes since joining OL Reign in June. Press tore her ACL in early June, two days before the USWNT's World Cup qualifying roster was announced. Andonovski controversially said that Press was not selected even prior to the injury despite her exceptional form for Angel City FC in the first two months of NWSL play.

"I think that she's performing well," Andonovski said after wishing Press a speedy recovery, "but it's not just her now. At this point, it's her competing with the players that are in front of her. I mean, for Christen to be back [on the U.S. national team] is not just to do well or perform well in her club environment -- it's also to out-perform the players she is competing against. And that would be players like Mallory Pugh and Sophia Smith and Alex Morgan, Ashley Hatch, Trinity Rodman.

"It's not easy to be a forward in the United States right now. Obviously, it's great, but it's not easy because the competition just got bigger and bigger."

Fishel's recent form evoked the same response from Andonovski last week. The 21-year-old Fishel is averaging roughly a goal per game this season for Tigres in Liga MX, where she signed earlier this year despite being selected No. 5 overall by the Orlando Pride in the 2022 NWSL Draft. Andonovski said he wants to see more consistency from Fishel over a longer period.

"I have not had conversations with Mia," he said. "We do follow her form and her performances, but I also have to say that there are a lot of players in NWSL that are performing as good or maybe better than Mia that we're very happy with, because ultimately that's what raises the level of play for everybody."

Morgan, Smith and Pugh have been Andonovski's preferred starting front three since June and it is hard to argue against their form. All three players are enjoying their best club seasons to date and are arguably the top three candidates for NWSL MVP. Morgan, 33, leads the league in regular-season goals with 13. Smith is two off that pace, while Pugh has eight goals and five assists following an electric, two-goal, two-assist performance in Louisville on Friday.

Yet the window is not entirely closed for those on the outside looking in. Mace and DeMelo got the call this camp for standout NWSL play, while Taylor Kornieck's first senior call-up came for qualifying after a promising start to the NWSL season. Sam Coffey went from an NWSL rookie with potential to a replacement player on the qualifying roster in a matter of months after starring for Portland. Midfielder Jaelin Howell and defender Carson Pickett also earned looks in training camp ahead of the CONCACAF W Championship.

But the competition to break into the U.S. squad won't get any easier. The USWNT's triumph at the CONCACAF W Championship -- which resulted in a berth at the 2023 World Cup and 2024 Olympics -- came without several prominent, but injured, players who are expected to push to win back their roles: forward Catarina Macario, midfielder Sam Mewis, defender Tierna Davidson, and forward Lynn Williams.

Crystal Dunn is back in camp to train with the U.S. after giving birth to her first child in May and could feature for both the U.S. and Portland Thorns before the end of the year, but she won't play in these games. Dunn is versatile and has long said she prefers to play higher up the field, but she has mostly played fullback for the U.S. (including as the starting left back at the 2019 World Cup) and is likely to return to that position, one in which the U.S. needs more depth and experience.

"In Crystal, we see someone that will be a very important player for us going forward if she can get back anywhere close to her best," Andonovski said last week. "Because we know how good she is on the field, but also her experience and leadership qualities off the field will be important for the young group that we have."

Leadership weighed heavily into the decisions to keep a few big-name veterans in the mix. Morgan, Becky Sauerbrunn and Megan Rapinoe were all specifically mentioned by Andonovski upon naming his CONCACAF W Championship roster.

Sauerbrunn, at 37, is in her second stint as captain. Rapinoe, also 37, was always part of Andonovski's plan and has justified the coach's long view with her recent form: since returning from the CONCACAF W Championship, she has four goals and three assists in four games, including a stunning assist and dramatic stoppage-time winner for OL Reign on Saturday.

Reintegrating other veterans from previous World Cup cycles, beyond those already part of the plan or returning from injury, looks unlikely. Whereas former U.S. coach Jill Ellis stuck ultimately decided to stick with more veterans for the 2019 World Cup after experimenting earlier in the cycle, the U.S. roster that will compete at the 2023 World Cup is likely to be younger than the squads that won the last two editions as the oldest team at the tournament each time.

"I am happy with where we are at," Andonovski said. "We are able to still figure out the right mix. I think that we're on the right track, we're moving the right direction. And when I say the right mix, I mean the right mix of youth and experience, because we do need the young players -- but not any young players. We are talking quality, young players like Sophia Smith and Mallory Pugh, Catarina Macario. We see Naomi Girma now and [Emily] Fox, they are doing very well.

"But we also need the experienced players to be there to show them the way. I think that the most important group is the middle group, to me, and that's the Lindsey Horans and Rose Lavelles, that still have the drive, the desire, the willingness to do the dirty work, but also have the experience, have been in big tournaments, have won big tournaments."

By year's end, this group will have played several more high-profile games together, and that's not a coincidence: Andonovski devised a plan last year to arrive at this point with a core that now has a taste of playing in pressure situations. That is why he didn't make a change from his starting XI in the 1-0 win over Canada in July's CONCACAF W Championship. He wanted his team -- which featured five starters playing in their first senior qualifying tournament -- to feel what it was like to be in that situation.

Then the calendar turns to 2023, at which point Andonovski is likely to know most of the players he plans on taking to the World Cup. Included in that group could be several important players returning from injuries. How those last few roster spots get filled will -- or at least should -- come down to form in the spring.

"No player who is playing for her club, whether it is NWSL or anywhere outside of the NWSL, is out of the picture for selection for camps and matches," Andonovski said.