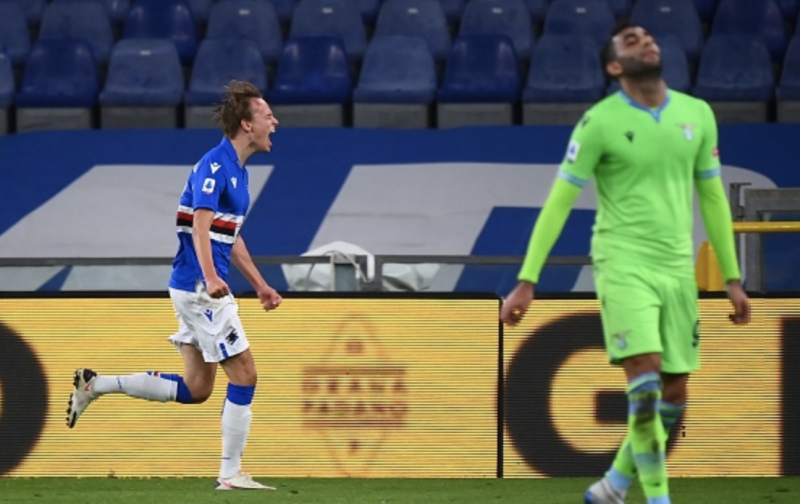 Sampdoria made surprisingly light work of last season’s nearly-men Lazio with a 3-0 win at the Stadio Luigis Ferraris on Saturday evening.

Ciro Immobile’s lack of presence was evident as Simone Inzaghi’s team failed to trouble Emil Audero all afternoon and home side took full advantage to secure their second Serie A win in the opening four with ease.

Tommaso Augello was the star of the show with a goal and an assist with the evergreen Fabio Quagliarella taking advantage of the former’s pinpoint cross to bag his third of the season before 20-year-old Mikkel Damsgaard grabbed his first for Sampdoria to complete the scoring in the second half.

The opening exchanges were competitive but offered nothing more than a couple of wildly overhit shots from Albin Ekdal as the few Sampdoria fans in attendance did their best to make themselves heard with the odd outburst of ‘forza Doria’.

Quagliarella gave the Blucerchiati a well-deserved lead on the 32nd minute with a fantastic header into the top corner from a perfect Augello cross which happened to be the first shot on target from either side. Aguello, who had been causing all sorts of problems with his energetic runs and quality crosses from left-back, doubled the home side’s lead on the 41st minute with a sublime half-volleyed finish from outside the area after a corner was half cleared into his path for his first Serie A goal.

The Biancocelesti made two half-time substitutions in an attempt to get back into the game by replacing Marco Parolo and Djavan Anderson with Mohamed Fares and Adam Marusic but both failed to have an impact.

There were two Serie A debuts made with half an hour left as Adrien Silva and Vedat Muriqi both stepped on for Sampdoria and Lazio, respectively.

Another Substitiute, Damsgaard, finished magnificently after bursting into the box, his shot hitting the underside of the bar before finding the net as Claudio Ranieri’s side cruised to victory, whereas Lazio failed to register a single shot on target for the first time Since February 2016 in Serie A.

Only a miraculous double-save from Thomas Strakosha kept the score down to three as Sampdoria began to strut their stuff and toy with their opponents, much to the delight of one fan in particular, the microphones picking up shouts of ‘ole’ from the stands as the hosts finished in style by knocking the ball around for fun.