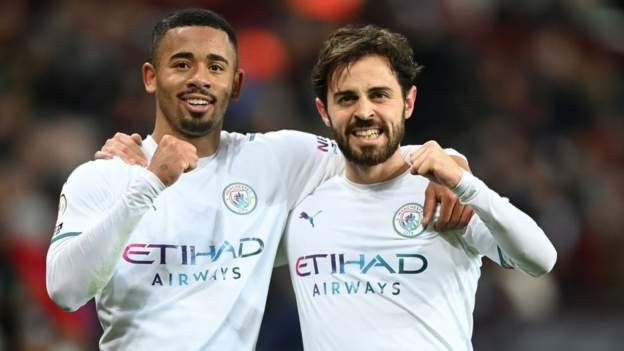 Bernardo Silva scored one of the goals of the season to help Manchester City beat Aston Villa and inflict Steven Gerrard's first Premier League defeat as a manager.

It was a fourth league win in a row for Pep Guardiola's side, one that keeps them second in the table, one point behind leaders Chelsea.

Silva showed world-class technique to side-foot volley Gabriel Jesus' dropping cross into the roof of the net from just inside the area, after City ripped their hosts open with a rapid break.

That sublime strike doubled the visitors' advantage before half-time, with Ruben Dias the unlikely source of their opener when he curled into the bottom corner from the edge of the box.

Villa have renewed resolve since Gerrard's arrival though, and Ollie Watkins replied immediately after the interval with a neat strike from a well-worked corner routine.

But the hosts were unable to find a leveller and Gerrard, having won his opening two games in charge, dropped points for the first time in the Villa dugout.

Jack Grealish was brought on as a late substitute to make his first return to Villa Park since a £100m summer move, greeted by a mixture of boos and applause from the home crowd that once adored him.

City boss Guardiola said before his side's trip to Villa Park they were facing a player "emergency", but there was still an abundance of talent available to the Spaniard.

Top of the pile right now is Silva, the mesmerising Portuguese playmaker who made an astonishing piece of technique look outrageously simple.

Dias' opener was reward for City's early dominance and Guardiola could not help but smile when Silva nonchalantly volleyed in a second before the break.

The diminutive midfielder had time to bring Jesus' delivery down, but instead caressed it first time beyond Emiliano Martinez to finish off a lightning counter-attack that started in City's own box seconds earlier.

The hosts' early approach was to soak up City pressure and hit them on the break, but the loss of Leon Bailey to a muscle injury after half an hour impacted that plan.

Villa have lost all six of the previous games in which they trailed at half-time in the Premier League this season, but whatever Gerrard's interval message was worked almost immediately.

They took the game to the champions, with Watkins steering in Douglas Luiz's corner within two minutes of the restart, much to the watching Prince William's delight.

That roused the Villa Park faithful and 18-year-old Carney Chukwuemeka went close to levelling, only to be denied by City goalkeeper Ederson.

Villa had rolled out the claret and blue carpet for returning hero Grealish beforehand, with Gerrard saying he would be welcomed back and the club tweeting "thank you for the memories".

He had to settle for a short cameo, having not played since 3 November for City, but the England international's return will help to ease Guardiola's injury concerns.

The victory also brought up Guardiola's 150th win in the Premier League with Manchester City, and he has reached that landmark in 204 games - faster than any other manager in the competition.

Attempt saved. Riyad Mahrez (Manchester City) left footed shot from outside the box is saved in the centre of the goal.

Attempt missed. Tyrone Mings (Aston Villa) header from the left side of the box misses to the left. Assisted by Douglas Luiz following a set piece situation.

Attempt missed. Tyrone Mings (Aston Villa) header from the left side of the box misses to the left. Assisted by John McGinn following a set piece situation.

Morgan Sanson (Aston Villa) wins a free kick in the attacking half.

Ederson (Manchester City) wins a free kick in the defensive half.

Attempt saved. Carney Chukwuemeka (Aston Villa) left footed shot from the centre of the box is saved in the bottom left corner. Assisted by Emiliano Buendía with a through ball.