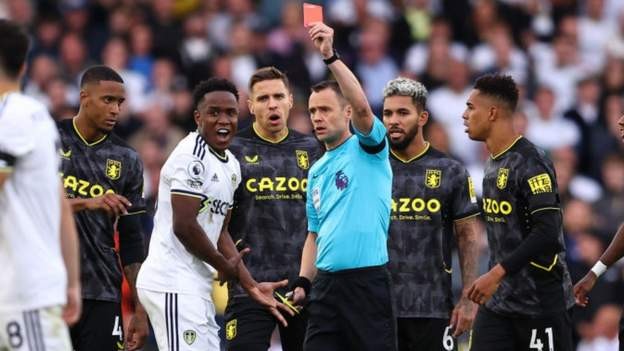 Leeds battled to earn a goalless draw with Aston Villa despite playing with only 10 men for the majority of the second half.

In a bad-tempered match, Colombia winger Luis Sinisterra was sent off after 48 minutes for two bookings - a foul on John McGinn and then blocking the ball when Douglas Luiz tried to take a quick free-kick.

The home side could have won it late on when substitute Patrick Bamford forced a fine save from Emiliano Martinez, with the Argentine also saving Brenden Aaronson's follow-up.

The ups and downs of football

For 23-year-old Sinisterra, a £21m summer signing from Feyenoord, it was a harsh blow after a great few weeks in his career.

He has scored three goals for Leeds this season and during the international break netted his first ever goal for Colombia in a 4-1 win over Guatemala, quickly following that with two more in a 3-2 victory against Mexico.

But three minutes into the second half, he stuck his foot out to block Douglas Luiz's free-kick and referee Stuart Atwell showed him a second yellow card.

The home fans and players were furious but the winger eventually left the field. Seconds later, Coutinho hit the post with a volley in a rare moment of skill in a frantic encounter high on passion and commitment.

Gerrard frustrated as Villa fail to get a winner

Villa manager Steven Gerrard was left frustrated at the result as his side aimed to win back-to-back matches for the first time this season after a 1-0 win over Southampton last time out.

The ex-England midfielder showed his annoyance at his side's failure to break the hosts down late on when he booted a water bottle along the touchline after Ollie Watkins had been denied by Illan Meslier.

This was the 20th game Leeds had played since Jesse Marsch replaced the sacked Marcelo Bielsa in February, although the American had to watch from the stands as he served a one-game ban for being sent off in the 5-2 loss at Brentford.

He spent the match watching from the press seats at the back of the stand and saw a feisty encounter that ended with six different players receiving at least a caution.

Meslier was the busier of the two goalkeepers, saving first-half efforts from Watkins and Coutinho, while Villa skipper John McGinn had a goalbound effort deflected wide.

Following Sinisterra's dismissal, the visitors had the majority of the ball but could not beat Meslier, while Bamford, on as a substitute, was denied at the other end with both sides ultimately picking up a point apiece.

Attempt blocked. Tyrone Mings (Aston Villa) left footed shot from the left side of the box is blocked. Assisted by Danny Ings.

Ashley Young (Aston Villa) wins a free kick in the defensive half.

Ollie Watkins (Aston Villa) wins a free kick in the attacking half.

Attempt saved. Ollie Watkins (Aston Villa) left footed shot from the left side of the box is saved in the bottom left corner. Assisted by Emiliano Buendía.

Robin Koch (Leeds United) wins a free kick in the defensive half.

Robin Koch (Leeds United) is shown the yellow card for a bad foul.