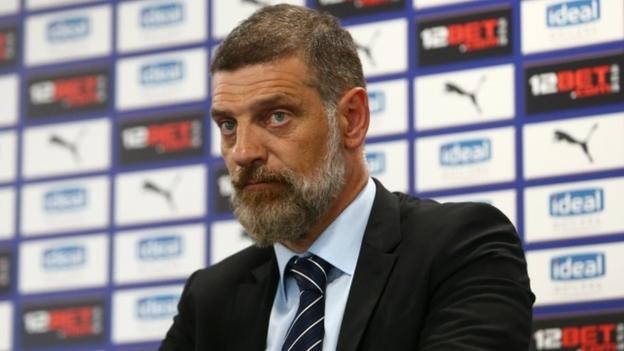 New West Bromwich Albion boss Slaven Bilic wants his Baggies team to "play like it is the last game of your life" to win back their Premier League place.

After a three-month saga to find a new head coach following Darren Moore's sacking, Albion have turned to the 50-year-old former Croatia international.

And Bilic is insistent that Albion can go further than last season's Championship play-off semi-finals.

"It isn't going to be boring, that's for sure," Bilic told BBC WM.

"Only if you stay positive and optimistic, then you can succeed. We need to play with passion, play with energy and play like it is the last game of your life.

"I want to play good football, make the fans happy and get the club back to the Premier League.

"There are bigger clubs and bigger leagues but I rate this league. I had some good opportunities, but the Championship is very attractive to me.

"I hope it's going to be the perfect match. It's a big club, where I wanted to come and, without being big headed, I hope it is good for West Brom too."

How ambitious are you going to be?

Bilic knows that he needs to be backed if he is to find the right formula - and that starts with Albion settling the future of last season's top two scorers, Dwight Gayle and Jay Rodriguez, who netted 45 league goals between them.

Albion technical director Luke Dowling has already made it clear that Albion do not want to pay "Premier League wages" for Gayle, who did so well on loan from Newcastle United last season.

But Bilic has already stipulated that both he and the sought-after Rodriguez need to remain part of Albion's plans.

"You need ingredients to be a good side," he said. "Last year we had a very good squad but that's changed.

"It's about deciding how ambitious you're going to be. Just take Gayle and Rodriguez.

"No matter how hard you work and how much luck you have, you still need good players.

"If they stay then brilliant. If they go, you have to replace them. If you don't replace them, then your chances are very slim."

He spent six years in charge of Croatia between 2006 and 2012, leading his country to two European Championships.

He has also a year in charge of Lokomotiv Moscow and two seasons at Besiktas before returning to West Ham, where he had been popular as a player, in the summer of 2015.