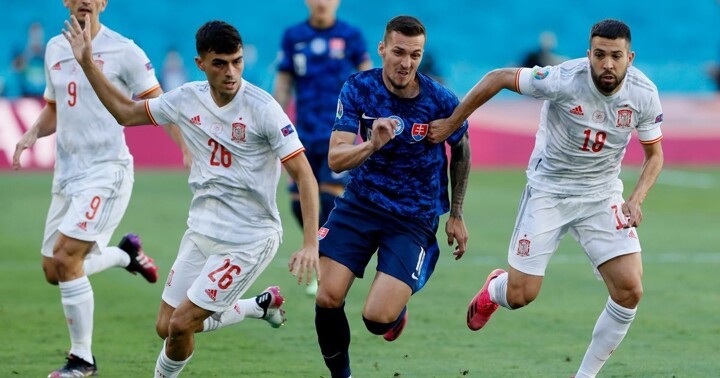 Ahead of the do-or-die clash with Slovakia, Luis Enrique described his Spain side as a bottle of cava waiting to pop. With a 5-0 victory in the final group match, La Roja certainly sparkled as they booked a place in the last 16 thanks to two own goals and efforts from Aymeric Laporte, Pablo Sarabia and Ferran Torres.

Spain were so dominant that they could even afford to miss a first half penalty. After Jakub Hromada fouled Koke and after Bjorn Kuipers went to look at the incident on the VAR monitor, La Roja had an 11th minute spot kick. Yet, Martin Dubravka saved from Alvaro Morata, for Spain's fifth consecutive penalty miss and their second at Euro 2020.

Dubravka, though, went from hero to villain as he then slapped the ball into his own net in the 30th minute for the opener. After Sarabia hit a fierce shot off the crossbar, the Slovakia goalkeeper tried to tip the bouncing and dropping ball over the bar. He didn't. It went straight in his own net.

That was something for the majority of the 12,580 inside La Cartuja to cheer about, before they could celebrated a second goal in first half stoppage time as Laporte scored with a header for his first goal since switching from France to Spain.

Slovakia made a double change at half time, but it served little use as La Roja extended their lead in the second 45 minutes. Spain found so much space out wide and this produced the third goal, as Jordi Alba was able to pick out Sarabia for a smart finish to make it 3-0 in the 56th minute.

Just 10 minutes later, Spain had another, this time from the right as Sarabia turned provider and played a brilliant low ball that Ferran Torres was able to backheel past the suffering Dubravka.

Yet another goal followed in the 71st minute, as Spain grabbed a fifth. After the ball was batted around in the air inside the Slovakia penalty area, Pau Torres looked set to score. Yet Juraj Kucka, in his attempt to clear it, turned the header into his own net.

With a five-goal lead, Luis Enrique was able to rest some of his key players and most of the Group E drama of the final 20 minutes came from Sweden vs Poland, as La Roja went top of the group for a moment when that game was 2-2. But, Viktor Claesson's late winner for Sweden puts the Scandinavians top of the group and means Spain progress in second place. They'll face Croatia in Copenhagen on Monday.