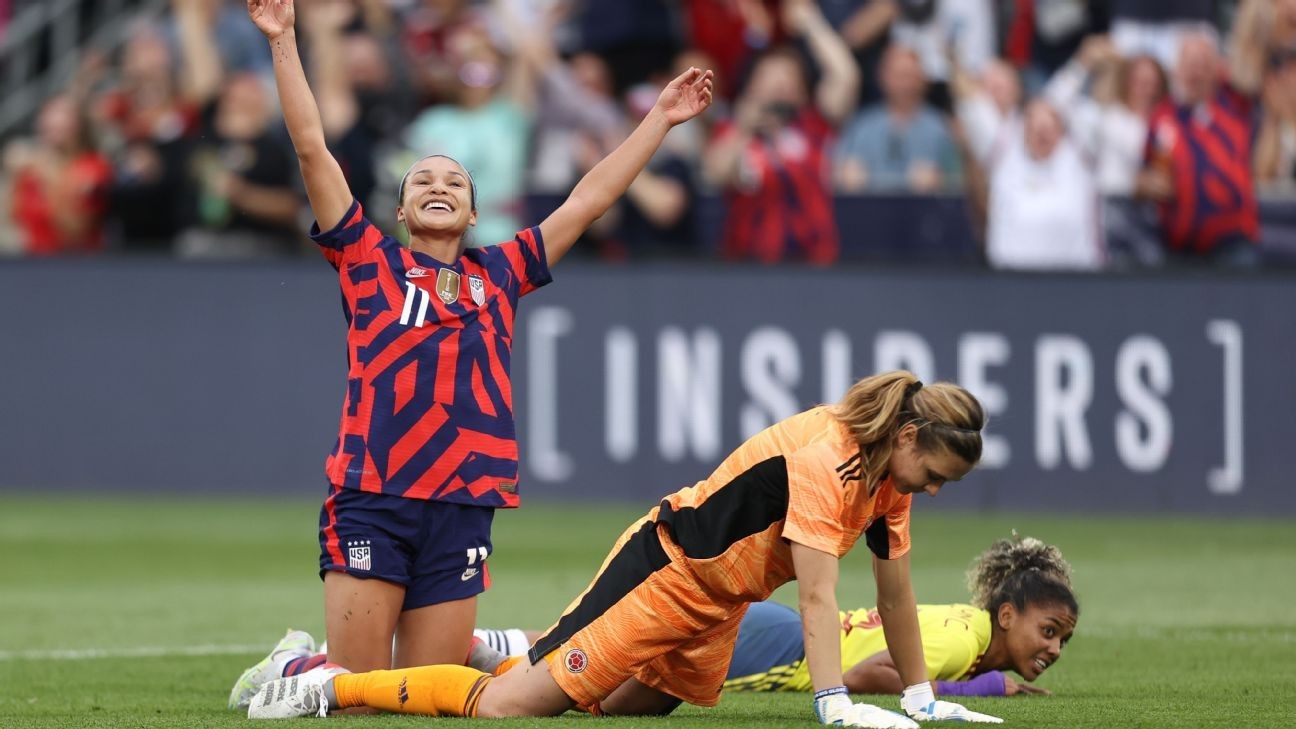 Sophia Smith scored twice in the second half and the U.S. women's national team beat Colombia 3-0 on Saturday night to extend its home unbeaten streak to 68 games.

- A blockbuster summer of women's soccer: What to watch, when and how
- Soccer on ESPN+: FC Daily | Futbol Americas
- Don't have ESPN? Get instant access

On Tuesday night, the teams will meet again in Sandy, Utah, as the United States readies for World Cup qualifying in the CONCACAF W Championship next month in Monterrey, Mexico. The United States is the two-time defending World Cup champion.

Smith scored her first in the 54th minute off a pass from Rose Lavelle when Colombian goalkeeper Catalina Perez came out of her goal. She added her second in the 60th minute.

Smith, who plays for the Portland Thorns in the National Women's Soccer League, has six international goals.

Perez made two penalty saves. She stopped Lindsey Horan's attempt late in the first half, and then saved Lavelle's chance in the 70th.

All eyes were on the team to see if they would make any collective demonstration on field over Friday's Supreme Court ruling rolling back Roe v. Wade. Instead, U.S. Soccer released a statement before the game.

"As our women's national team represents the U.S. on the field today in Colorado, the occasion serves as a reminder of the rights and freedoms that women and their allies have fought for, earned and deserve," the statement said. "The Supreme Court ruling on June 24 is counter to the freedoms promised as a nation and as a people. U.S. Soccer will advocate at every opportunity for human rights, including the right to make personal healthcare decisions as there is no equality without bodily autonomy."

Megan Rapinoe made an impassioned plea for abortion rights on Friday in the wake of the high court's decision.

She was asked about the upcoming game in Utah, which she said the team wouldn't refuse to play. Utah had a trigger law that made all elective abortions illegal when the high court ruled. Utah's law has exceptions for pregnancies from rape or incest, and also make exceptions for women whose health would be compromised.

"I think, as you guys have seen, the most powerful thing we can always do is show up and not only express our supreme skill and talent and joy on the field, but to be able to have that platform," Rapinoe said.

Ashley Hatch started at forward, flanked by Mallory Pugh and Smith. Hatch replaced Catarina Macario, who tore an ACL while playing for her club team, Lyon, in France. Veterans Rapinoe and Alex Morgan started on the bench.

Morgan replaced Hatch at the half and Rapinoe entered the game to loud cheers with about 15 minutes to go.

Colombia is hoping to secure one of CONMEBOL's spots in the 2023 World Cup, co-hosted by Australia and New Zealand. Ranked No. 28 in the world, Colombia missed out on the 2019 World Cup.