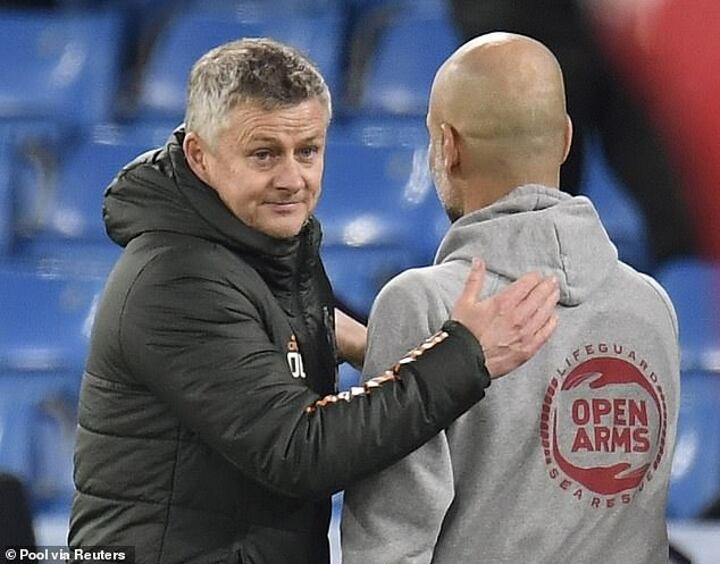 The nagging question for Manchester United fans, once the initial giddy thrill of winning Sunday's derby fades away, is where has that kind of performance been for the past few weeks?

It's all well and good going to the Etihad Stadium and convincingly beating Manchester City but Pep Guardiola's side are still 11 points clear at the top of the Premier League.

If United had shown such control and conviction in their recent draws against West Brom, Chelsea and Crystal Palace, we would still have a title race.

Nonetheless, for Ole Gunnar Solskjaer there was the satisfaction of yet another tactical masterclass against Guardiola's City and that isn't to be sniffed at.

Solskjaer has become the first United manager to win his first three away games against City.

And of all the bosses to have faced a Guardiola team more than three times, Solskjaer is the only one to have beaten the Spaniard (four times) more often than he has lost to him (three times).

It will come too late to change the destination of the Premier League trophy but in masterminding another win, Solskjaer has provided the blueprint of how other teams can get the better of City.

It's an effective formula of utilising United's instinctive counter-attacking game to its full potential, preying on City's few shortcomings and, let's be honest, a little sprinkling of good fortune too.

There has been much talk of City sweeping all before them between now and the end of May to win an historic and unprecedented Quadruple of Premier League, FA Cup, Carabao Cup and Champions League.

To achieve this, Guardiola must navigate a further 20 games, treading the tightrope of knockout competition in 10 of them.

It's a tall order, especially now Solskjaer has shown every opposition manager how City can be out-thought and out-played. But what's the secret?

No possession, no problem

The most obvious thing any opponent, no matter their level, has to realise is that City are highly likely to see more of the ball than you will.

Possession equates to control and so it must be tricky for top teams like United, used to dictating the tempo against most sides, to get their heads around.

But once you've accepted this, an effective game plan can be found to get the better of Guardiola's ball-hoggers.

United saw just 34 per cent of the ball on Sunday, which actually was relatively high for their recent meetings with Guardiola's team.

In the same fixture last season, which United won 2-1, they had just 28.1 per cent of the ball. In the return fixture at Old Trafford just before lockdown, which they won 2-0, United saw only 27.7 per cent.

It does mean that your defence and defensive midfielders have to show first class discipline, organisation and work rate to deprive City of space to work in but there's no shame in seeing very little of the ball.

Incision on the counter

City's inevitable pressure and possession leaves space to exploit if you can shift the ball quickly on the counter-attack when the opportunity presents itself.

This has been key to Solskjaer's game plan in the bigger games ever since he took over at Old Trafford.

In an ideal world, he would want United to have the greater control but they are blessed with forwards of blistering speed who have turned the counter-attack into a fine art.

It was little surprise to see the speedy duo of Marcus Rashford and Dan James line up against City on Sunday, with Anthony Martial ahead of them. All three have the pace to trouble City's back line and so it proved.

The same trio were effective when United won at the Etihad in December 2019, with both Rashford and Martial on target.

In the second leg of the teams' Carabao Cup semi-final last season, in which United won 1-0 at the Etihad but went out on aggregate, Solskjaer partnered Martial with Mason Greenwood and Jesse Lingard with Rashford sidelined through injury.

Guardiola would have known full well that the key ingredient for United was speed but again his team couldn't find a way to negate it.

United caused real problems when they flew forward in numbers and at speed. First Rashford and then Martial ran directly at City's defence inside the first minute, leading to the penalty that Bruno Fernandes converted.

And their second goal shortly after half-time was a classic of the genre. Dean Henderson threw the ball to Luke Shaw, who made a thigh-burning run of about 70 yards, played a one-two with Rashford and finished with his left foot.

When City commit forward, which is a great deal, there will always be room to exploit in behind. United have become experts at this and are showing others the way.

Another noticeable thing that unsettled City was United's high press from the very first whistle.

It boils down to the fact that Guardiola's team, especially their defenders, just aren't use to being put under pressure in the vast majority of games.

When City are stroking the ball around in defence, most teams naturally settle back into their solid banks of four or five in anticipation of the next attack.

What United have realised - and others should to - is that even the likes of John Stones, Ruben Dias and Joao Cancelo, all enjoying excellent seasons, hate being pressed.

In the lead-up to the early penalty, Gabriel Jesus was mugged of the ball by Fred and Rashford was away. United suddenly had seven players in City's defensive third and brains were scrambled, leading to Jesus, desperately trying to atone, clipping Martial just inside the box.

And in United's next attack, Shaw bombed down the left to support Rashford on the overlap, creating a two-on-one. Cancelo was trying to clear but red shirts swamped him inside the box and Shaw had a shot that he wastefully fired straight at Ederson.

City's defenders will try and pass their way out of trouble but commit two or three players to closing down and blocking off these avenues of escape and they become flustered and commit errors.

Credit to Solskjaer for setting United up to play like this. Their hard press early in the game gave them a strong grip on proceedings.

What also stood out was how high United's back line played. Most teams sit in against City, getting deeper and deeper before inevitably being overrun.

But Harry Maguire and Victor Lindelof often stepped forward almost to the halfway line, perhaps encouraged by Henderson, who is putting in a strong challenge to regular No 1 David de Gea.

Maguire is adept at bringing the ball out of defence but he often advanced beyond the two holding midfielders, Fred and Scott McTominay, into the City half.

With Shaw the man of the match and Aaron Wan-Bissaka excelling in keeping Raheem Sterling quiet yet again, it laid the defensive foundation for United's win.

Henderson kept a ninth clean sheet in 15 United appearances in his toughest assignment yet and Roy Keane, in the Sky Sports studio, praised him.

'The goalkeeper was excellent. Ole's used that word presence and that's what all great keepers had,' the former United captain said.

Henderson didn't have too many saves to make and it would be premature to get carried away. De Gea has been excellent with his shot stopping in countless previous meetings with City.

Pep doesn't have a Plan B

Once United took a firm grip on the contest with the second goal on 50 minutes, it was interesting to note how City slowly started to drift away from Plan A and the players took things into their own hands.

Let's be honest, Guardiola's 'philosophy' and methods of playing, swamping teams with endless possession and pressure and chances, gets results 95 per cent of the time and especially of late.

But when that doesn't work as expected, the absence of a back-up plan is a weakness.

Kevin De Bruyne was well marshalled by Fred and McTominay, misplacing passes in a most uncharacteristic way. Riyad Mahrez and Sterling were shackled by Shaw and Wan-Bissaka respectively. Jesus again showed why City need a new striker.

And as time slipped away in the second-half, City abandoned their usual passing game and started hurling crosses into the United box. One almost led to Sterling halving the deficit but he failed to make contact right in front of goal.

When City do fall short, such as against Lyon in the Champions League last season, Guardiola's lack of a Plan B comes under scrutiny. Their lack of experience at chasing games is exposed.

Of course that's a good thing - it means they rarely lose or even fall behind - but sometimes you feel they need to swallow their pride and play some more direct, more ugly football when the attractive stuff falls short.

The previous wins over City from last season remained fresh in the memory, of course, but it was still impressive how Solskjaer sent his side out believing they could win the derby.

Guardiola's team certainly had an aura of invincibility about them after 21 consecutive wins and with their commanding lead at the top of the Premier League.

But United weren't cowed for a moment, setting the tone from the first whistle and tearing into their opponents. A first-minute penalty showed they are soon rattled.

The dedication of United's players to the cause was admirable. Look at how Rashford charged back 60 yards to stop Mahrez late on, injuring himself in the process. Greenwood at one point blocked a Phil Foden shot inside his own box.

Even the much-maligned Martial was bang up for it and could have made it 3-0 only to shoot at Ederson when McTominay played him clear.

The successful execution of a Solskjaer game plan against City once again proved United have kicked up a level this season. This now needs to be confirmed by finishing a comfortable second place and winning either the FA Cup or the Europa League.

It also confirmed that with the right summer investment - and this probably involving signing another world class game-changer figure like Fernandes - United can challenge City and others for the title next season.

And, in the here and now, it showed other managers who come up against Guardiola's City between now and the end of the season that they are indeed fallible.