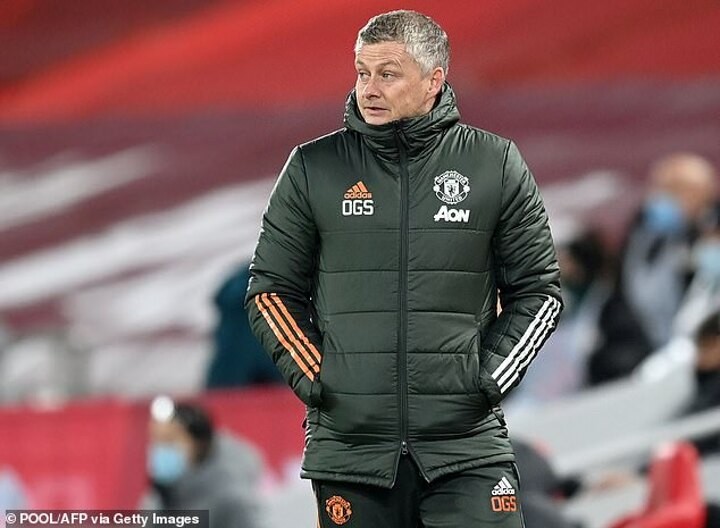 With no fit centre-backs again, the hosts fielded midfield duo Fabinho and Jordan Henderson in the centre of their defence but the pair were not really exposed, even if goalkeeper Alisson Becker had to make two good saves to keep out Bruno Fernandes and Paul Pogba in the goalless draw.

The top-of-the-table clash failed to live up to its billing and there was not even a penalty incident never mind a controversy, one of the major points of debate leading up to the fixture, to talk about over the course of 90 minutes.

But Solskjaer admits United left Anfield disappointed they were not able to open up a six-point gap over their arch-rivals at the top.

'They are a good side and they have some injury problems but we didn't pounce on that,' he said. 'I felt we grew into the game and got stronger and stronger and were closer to winning.

'We were a bit disappointed in the performance, not just the result.

'We didn't do well enough to cause them problems in the first half but we defended well and they didn't create too many chances.

'We know we have players who can win you a game in the blink of a second and Bruno and Paul almost did.

'But I think everyone was a bit disappointed with the way we started the game but that is a good feeling to have that we were disappointed in the performance.'

Although Liverpool's long unbeaten home league run was extended to 68 games they failed to properly test David De Gea in the visitors goal and for the first time since March 2005 the Reds have failed to score in three consecutive league matches.

Manager Jurgen Klopp insists he was happy with the performance as chances are still being created - they had 18 shots but only three were on target - and he is confident the goals will return.

'We have a point more than before the game,' he said. 'I think the performance was good enough to win it but to win a game you have to score goals and we didn't do that, so that's why we had that result.

'There is nothing fundamentally different, it is just the result is different.

'We try and score and we try not to not score. We have not to worry about it but we obviously have to ignore the fact and hope it will be good again.

'We did that, but the only possibility we have is to create situations and be ready to fail and do it again.

'That is a massive different to when you are flying, because then you deal with the missed chances better.

'I saw my team playing tonight a really good team with a clear idea with super passes and great counter-pressing and great desire to score and we didn't score.

'We will create chances and we will score. It is not as if we decide we will score a goal and now we will do it.

'I will help as much as I can to change the situation.'