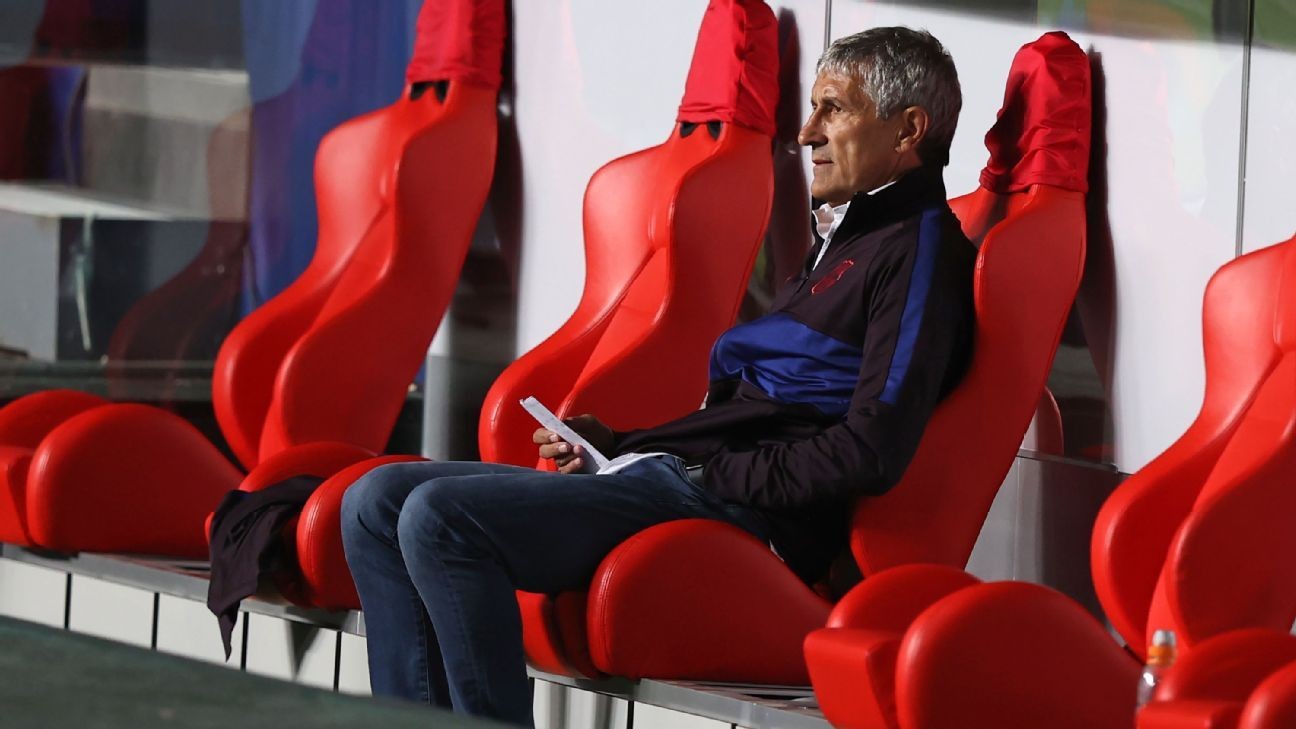 Quique Setien's tenure as Barcelona coach is set to come to an in the coming days following Friday's humiliating 8-2 Champions League exit at the hands of Bayern Munich, according to ESPN sources.

Barca were chasing their first Champions League triumph since 2015 but, having already missed out on the La Liga title, were ruthlessly exposed by Bayern as they suffered their biggest ever European defeat.

The Champions League was Barca's last chance of silverware this season after they missed out on La Liga to Real Madrid last month, but defeat means a first trophy-less season at Camp Nou since since 2007-08.

- Marcotti: Bayern's brilliance the story of the match
- Ratings: Barca woeful all over the field in defeat
- Stream ESPN FC Daily on ESPN+ (U.S. only)
- Champions and Europa League fixture schedules

The loss was the final nail in Setien's coffin, but sources have told ESPN that the decision to replace the coach had already been taken prior to the Bayern game.

ESPN reported on Friday that the overriding feeling among the Barca hierarchy is that Setien, hired in January, has failed to win the dressing room because of his relatively limited achievements as both a player and a coach.

Barca want their next appointment to be a name that garners immediate respect among the players, with Mauricio Pochettino, Ronald Koeman and Xavi Hernandez among the early front runners for the role.

President Josep Maria Bartomeu confirmed changes will be coming after defender Gerard Pique called for a rebuild from top to bottom following the "unacceptable" performance against Bayern, but he wouldn't comment on Setien's future.

"We have already made some decisions, but I am not going to say what they are now," Bartomeu told reporters. "Now is not the time. It is time to reflect."

Asked if he feared for his job, Setien told a news conference: "It is too soon to say if I am going to continue or not. It does not depend on me."

Setien, 61, went into the Bayern game under intense pressure after missing out on La Liga to Real Madrid last month.

The relationship between the coach and some of the players began to unravel during the final weeks of the season as the title slipped away.

Sources told ESPN after the 2-2 draw against Celta Vigo that some members of the squad did not click with Setien or his assistant Eder Sarabia from day one.

Lionel Messi's comments after a defeat to Osasuna in July that Barca have been "weak" and "inconsistent" since January were taken as a criticism of Setien.

However, the two held clear-the-air talks and the players and coaching staff all pulled together to prepare for last weekend's win over Napoli.

Despite beating Napoli to make the final eight in Portugal, though, sources told ESPN that even beating Bayern and going on to reach the Champions League final would not have saved Setien.

Setien had only replaced Ernesto Valverde in January, taking over a side that had just been knocked out of the Spanish Supercopa but that was top of La Liga and still in the Copa del Rey and the Champions League.

Defeat to Athletic Bilbao, though, soon ended Barca's hopes of appearing in a seventh successive domestic cup final and a failure to beat Madrid to the league title left them on the brink of a trophy-less season.

Barca had held a two-point lead when the league resumed in June following the lockdown in Spain caused by the coronavirus pandemic but dropped points against Celta, Atletico Madrid, Sevilla and Osasuna saw them overtaken by Madrid.

Setien had been brought in with the aim of restoring the essence of Barca's footballing philosophy, but sources told ESPN that several members of the club's hierarchy feel he even failed to do that.

The former Real Betis coach could argue he wasn't dealt the best hand. Poor squad planning meant Barca had to make the emergency signing of Martin Braithwaite from Leganes in January to make up the numbers and for several post-lockdown games they have only had 14 first-team players available.

A source told ESPN that the problems run deeper than Setien but he will be the first casualty of Barca's barren season.