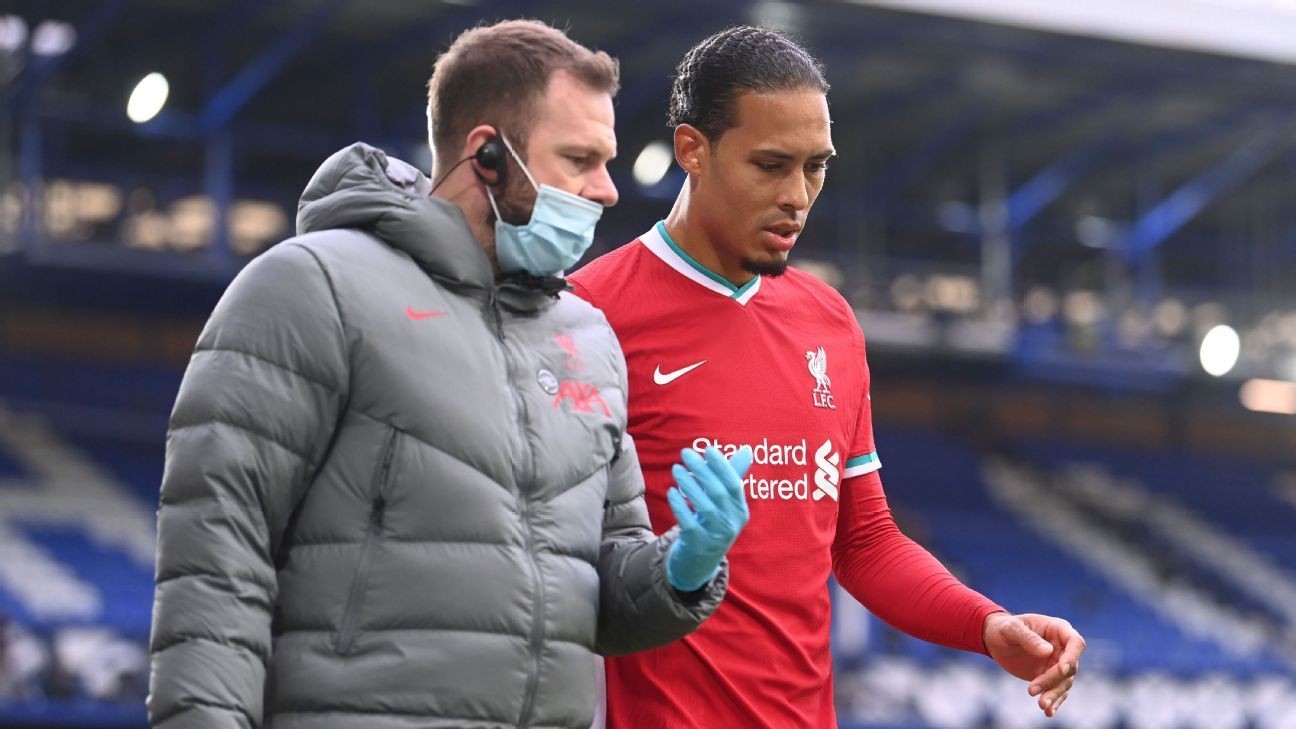 Virgil van Dijk will learn on Sunday if he sustained a season-ending cruciate ligament injury during Liverpool's 2-2 draw with Everton on Saturday, sources have told ESPN.

The Liverpool defender underwent scans in a local hospital following the game after being injured as a result of a challenge by Everton goalkeeper Jordan Pickford five minutes into the 237th Merseyside derby at Goodison Park.

Although Van Dijk was able to walk off the pitch following lengthy treatment, sources have told ESPN that Liverpool are concerned by the extent of the injury and are determined to get a clear diagnosis by sending the Netherlands international to see a consultant on Sunday.

Reports have suggested that Van Dijk suffered a cruciate knee ligament in the Pickford challenge, but Liverpool are reluctant to speculate on the damage sustained by the £75 million star until he has been fully assessed by a medical professional.

But if the worst fears are confirmed, Van Dijk could miss the rest of this season and face a battle to fit for the Netherlands' Euro 2020 campaign next summer.

The failure of the VAR official David Coote to review Pickford's challenge on Van Dijk has angered Liverpool, sources have told ESPN, to the extent that they will demand an explanation from the Professional Game Match Officials Board (PGMOL) -- the organisation in charge of referees and VAR.

"Virgil, it is not good," said Klopp, who defined Pickford's actions as "not a challenge the keeper can do."

"He plays on with pain, he never misses a game. I don't know how bad it is but it is not good," he added.

Liverpool, meanwhile, are hopeful that an injury sustained by midfielder Thiago Alcantara against Everton does not prove to be serious.

Everton forward Richarlison was sent off for the 90th minute challenge, which caught Thiago on the knee.

Thiago eventually got up from Richarlison's red-card challenge and was able to create the opening for Henderson's disallowed goal but later reported an injury and was also sent for a scan on Saturday.

"When we were walking off, Thiago tells me he thinks he was injured. We will have to see," Klopp said.

After the match, Richarlison released a statement on social media to apologise for his challenge on Thiago.

"Anyone who knows my background knows that I've never been a violent player," he wrote. "What happened today was a fatality due to sheer excess of dedication. I did not challenge that play with the intention of hurting Thiago.

"When I realised we were going to crash, I retracted my foot but my knee caught him on the way thorugh, which was inevitable due to the speed of the play. I've already sent a message to him apologising and I am also doing it publicly.

"I hope he is fine. I also apologise to my teammates, the club and the fans for leaving them with 10 men. Unfortunately, there is nothing I can do to change what happened, other than to reflect, work and move on."