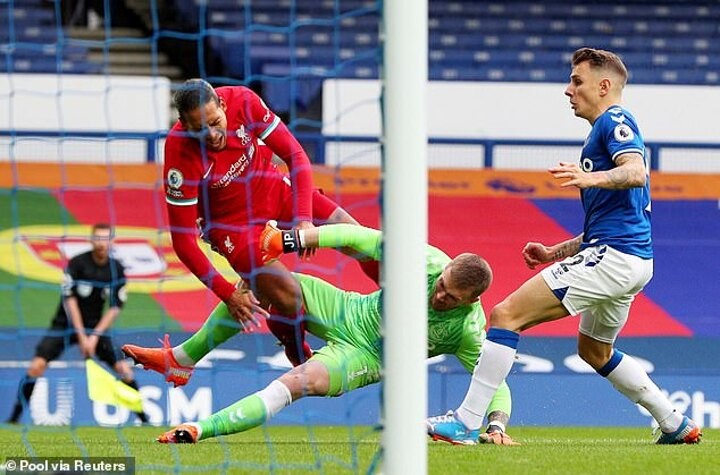 Southampton boss Ralph Hasenhuttl believes Everton goalkeeper Jordan Pickford should not be facing his team on Sunday and instead should be serving a suspension for his 'absolutely disastrous' tackle on Virgil Van Dijk.

The England No 1 has been under scrutiny over the incident during last weekend's Merseyside derby, which left Liverpool defender Van Dijk needing knee surgery and facing a lengthy spell of rehabilitation.

The incident had been reviewed by VAR, with the Holland international adjudged to have been offside before he was clattered by the Toffees keeper.

Liverpool midfielder Georginio Wijnaldum, though, suggested the goalkeeper was 'stupid' and had made the challenge on his fellow Dutchman without concern for the player's welfare – which Everton boss Carlo Ancelotti has since dismissed as unfair.

Hasenhuttl feels the fact VAR was able to intervene on the offside call muddied the water somewhat, but is in no doubt such a challenge should have resulted in a straight red card.

'I think yes (Pickford should have been sent off),' the Austrian said. 'I also had a discussion about this. It was a horrible tackle to be honest.

'I see the bigger issue as sometimes with this offside rule, (whether it is) or not.

'We have more often the situation now that the game goes on although it is offside and then some duels happen that don't have to happen normally, this is an issue.

'But we are also happy about having the VAR because now you see, in the Europa League, there is no VAR, how many discussions there are around decisions from the referee.

'But sure, you cannot go like this into a duel. This is an absolutely disastrous tackle to be honest.

'I think sure it can be a red card in the end… when you only see the tackle, (it) was horrible yes.'

Despite the backlash, Everton boss Ancelotti insists he has not considered removing Pickford from the starting line-up.

Ancelotti has watched Pickford in training and has no doubts that he is in the right frame of mind to face Southampton on Sunday, as the league leaders aim to continue their outstanding start to the campaign.

Ancelotti, who expects to have James Rodriguez fit after he trained on Friday having recovered from a bruised foot, said: 'I saw him in training this week — he was focused, he put in a good performance in training, he was concentrated so this is what I want to see from a player.

'If he has a problem, I want him to come to me to talk but he didn't so I think he is absolutely OK.'

On Pickford's form, he added: 'Sometimes he did well, sometimes he could do better. That's it. He could do better I think with the disallowed goal, but he did really well two or three times in that game by making fantastic saves against Alexander-Arnold in the first half and Joel Matip in the second half.

'I think when we manage a performance, I'm used to looking at the right things, not only the wrong. I'm used to being quite cold, and try to see what he did good and what he did wrong.'