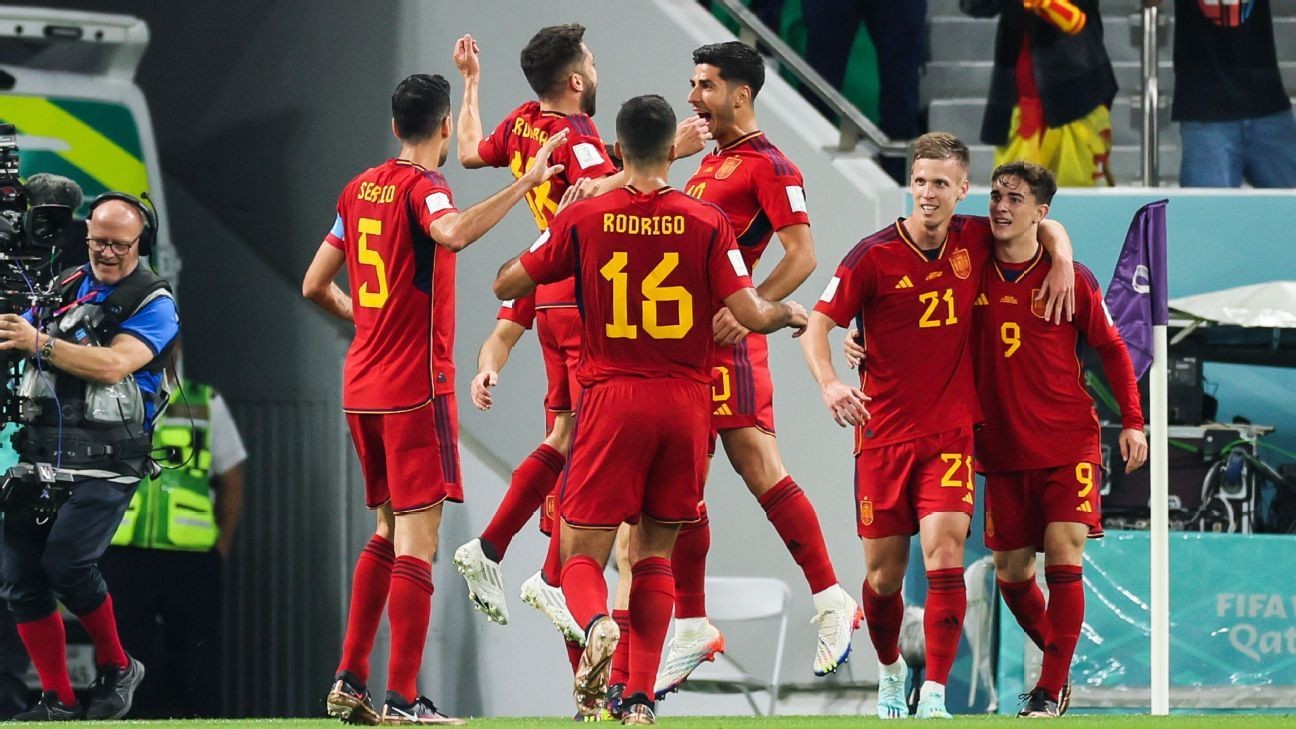 DOHA, Qatar -- The past four times Bayern Munich have played Barcelona in the Champions League, the aggregate score has been 11-0 to the Bundesliga side. From that, you might draw the conclusion that Spain have no chance in their World Cup clash with against Germany on Sunday.

Why? Because, from those Bayern teams, Germany coach Hansi Flick can field Manuel Neuer, Josh Kimmich, Serge Gnabry, Jamal Musiala, Leon Goretzka, Leroy Sane, Niklas Sule and Thomas Muller at Al Bayt Stadium. And because in Luis Enrique's squad this weekend you'll find Jordi Alba, Eric Garcia, Sergio Busquets, Ansu Fati, Pedri, Gavi, Alejandro Balde and Ferran Torres -- all of whom have been battered by German might, menace and muscle over the past two seasons.

Those four matches were dramatic, clear-cut demonstrations of power, precision, speed, height and sporting aggression. And we're not even counting the 8-2 Bayern win over the Blaugrana in the 2020-21 quarterfinal. It began to feel like German football was actively trying to stamp the life out of Spain's more delicate, possession-based, technically delightful artistry.

So comprehensively was the cream of Spain demolished, at club level, that you can bet Pedri, Gavi, Busquets, Alba et al. knew precisely how Costa Rica felt when they left the Al Thumama pitch on Wednesday -- thrashed 7-0. After such magnificent effervescence from La Roja, against opponents previously famed for their defensive organisation, two questions immediately arise: is this form transferable to the crucial Group E match against Germany? And, should their fans worry that newfound complacency and cockiness can corrode Spain's readiness for a titanic battle?

Last question first. I was in the player tunnel, working, when Luis Enrique's victorious side came off the pitch. No shouting, no glee, no boisterous celebrations -- if you'd not seen the match or the scoreboard you'd have thought it was half-time with things balanced at 0-0. Not a hint of overexuberance or swagger. Faces set, serious manner -- the atmosphere was: Job done, what's next?

Spain got their World Cup up and running in style with a 7-0 win over Costa Rica. Liu Lu/VCG via Getty Images

One of Luis Enrique's immediate analytical reactions was to say: "Look, we might be beaten in the next match but it will not, under any circumstance, be because we've relaxed after this result." It's worth believing him too. The 52-year-old Asturian has woven a magic spell on his personnel. Spain's footballers are convinced about his plan, submit to his rules, are infused with his "attack, press, ambition" philosophy. In fact they are, whisper it, really enjoying themselves while domiciled at Qatar University.

Whether the brutal destruction of Costa Rica says specific things about Spain overcoming the huge physical, athletic and attitudinal advantages which Germany's Bayern core have recently enforced on Spain's Barca contingent is a separate matter. Every match is a new universe of detail, mentality, form, luck and tactics.

However one thing is crystal clear: the throbbing, upbeat, evangelical message which has been thumping out of the Spain training HQ since they got here last week was telling the truth. I'll share some of the statements we've been given on and off the record:

"We're a band of brothers."
"The atmosphere is spectacular."
"We are a group of friends enjoying ourselves and pulling for one another."
"There's no way that this group will let everyone down..."

Now, do all of those feelings negate the fact that Spain are a young, raw group who lack an outright, punishing goal scorer in the style of Fernando Torres, David Villa or even Raul in his day? Not on their own. But not only are the majority of Spain's players hitting form just at the right time they seem fresh, quick of limb and mind genuinely relishing the way in which their coach offers them freedom to go out and play beautifully.

It's a searing memory for me that in the days building up to Spain's 2010 World Cup win Xavi stopped the FIFA referee briefing which was being conducted by Horacio Elisondo and insisted: "Enough of all this about the way you'll enforce the rules -- go and tell Sepp Blatter that the pitches are poor, that the grass needs to be cut and watered and that he's giving a premium to defensive, boring football."

That version of La Roja wasn't just in South Africa to win, they wanted to attack, to entertain, to make football look beautiful. This year's group yearn for that too.

Vicente del Bosque's team won the 2010 World Cup with the lowest goal total in history, slogging their way across churned-up, slow-playing surfaces and, generally, playing against either defensive or thuggish rivals (semifinal opponents Germany excluded.) Back then, Germany coach Joachim Low adored the Spanish verve, technicality, vision and passion for passing. German football, in the ensuing years, maintained its taste for tall, hard, aggressive, fast footballers but relentlessly added better technical skills, better tactical appreciation. At club level, at least, the borrowing of the Spanish template, while blending it with traditional Teutonic values has worked a treat.

Cut to today again and Spain are back in that fledgling state of wanting to perform with thrills, skills, daring, incessant passing speed. Luis Enrique has let them off the leash. They genuinely all believe, as Xavi vehemently stated 12 years ago, that the World Cup should be a place of entertainment, extravagance, elegance... a place where dreamers can dream and inspiration is injected into kids watching all over in the world. Most of the other sides seem happy to bank on no worse than a 0-0 and hope for a lucky late goal or two. That attitude would make Spain's principal players vomit with disgust.

What was interesting about how La Roja treated Costa Rica was the way in which even with three, four or five goals tucked past Keylor Navas they continued to go for the throat. Not conserving energy, no subconscious foot off the gas and no coasting out the last 15 minutes. Spain continued to demonstrate precisely the ambition and total commitment to attacking which Luis Enrique has been promising. If they are 1-0 up with five minutes left in a big match later this tournament, then expect them to do precisely the same thing.

"Don't get me wrong, our job is to win so I'm not going to reject a victory where we haven't played well" he told me with a laugh the other day. "But we'll never die of fear, if we ever have to go down it'll be with ambition, on the front foot and trying to beat whoever we meet."

I love that kind of talk, particularly from those who then walk the walk. Did you watch them? Didn't they light up an otherwise overly cautious, overly dull World Cup? Now, however, comes a different kind of test.

Germany are the proverbial wounded animal. Twice over. Were they to lose on Sunday, there's a good chance that they are out of a World Cup group stage for the second time in four years. Utter and complete disaster for Die Mannschaft. Moreover, they will understandably be seeking cold-blooded revenge for the 6-0 thrashing they took off Spain the last time these two sides met in the UEFA Nations League back in November 2020. In fact, you'd hope Flick has prepared a nice Black Forest gateaux or some other Bavarian delight with which to thank Luis Enrique prematch. That six-goal humiliation of Low's Germany in Seville two years ago was the final straw for him and the 2014 World Cup-winning coach announced his withdrawal from the position a few months afterward. Flick got the job. Now it's all-in.

Another thing which stood out about Spain's heavenly seven against Costa Rica was the way in which their coach is in the zone. Marco Asensio has been treated like a spare part at Real Madrid this season, out of contract in June and with only three starts out of a possible 21 matches so far. Yet he's named Spain's first-choice centre-forward and scores. Torres, subjugated by Ousmane Dembele's requirement to play on the right at Barcelona, is restored to his natural position and scores twice. Balde -- aged 18, a Barcelona B squad member as recently as August and called up by Spain as a last-minute replacement -- comes on and helps create a goal with a sprint and dribble which ate up two thirds of the pitch. Welcome to the World Cup, kid. Dani Olmo, off the back of a brutal few months out injured, starts instead of Ansu Fati and not only scores but gets the crucial opener and gives an assist, too. And Nico Williams, only in the squad since September, is brought in, assists the vital goal to win in Portugal and reach the Nations League semifinal then against Costa Rica and sets up Carlos Soler's goal (all but one of La Roja's five subs either scored or created a goal against Costa Rica.)

It all adds up to the truth that, at the moment, Spain's coach appears to possess the Midas touch. When the teams come out at the Al Bayt Stadium on Sunday, Germany will be thinking: they can do what Bayern did to Barca, while the Spanish players will all be sticking to the mantra: "In Luis Enrique we trust."

Whoever prevails, this is guaranteed to be precisely the kind of open, attacking and hopefully thrilling contest which this odd World Cup requires.