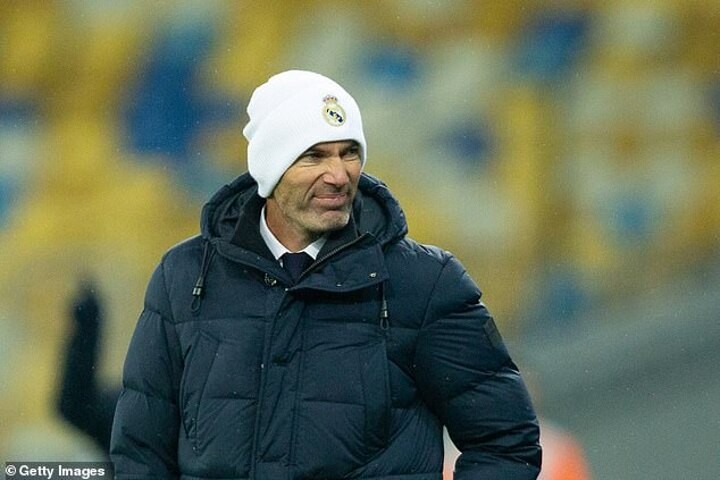 Real Madrid's shock Champions League defeat to Shakhtar Donetsk has plunged them into 'total crisis', according to the Spanish press, as manager Zinedine Zidane insisted he won't quit.

The 13-time European champions lost 2-0 in Ukraine to drop to third in Group B and must now beat Borussia Monchengladbach next week to make absolutely sure of progress to the last-16.

Shakhtar, who moved above Real into second in the group, have now beaten Zidane's side home and away.

And the verdict in Wednesday's newspapers was brutal, with Sport describing the defeat as 'disastrous' and the situation as a 'total crisis'.

They added that 'Zidane's project is showing symptoms of agony' and the hierarchy at the Bernabeu are considering dismissing him despite the French manager's insistence he won't go.

'From bad to worse' was the headline on the front of Mundo Deportivo, who featured a picture of a floored Luka Modric during the defeat.

AS showed Zidane, wearing a thick coat and woolly hat in the chill of Kiev, and the headline 'borderline situation' to reflect the Real's chances going down to the wire next week.

The front of Marca featured a sea of dejected Real players and the Spanish idiom 'Quien te ha visto y quien te ve…' which translates into English as 'wow, how you've changed, you look totally different.'

There is certainly a marked contrast this season to the Real team that won LaLiga back in July.

Zidane won three consecutive European Cups during his first spell at the club but they now face the humiliating prospect of playing Europa League football after Christmas unless they win against Gladbach next week.

Madrid could still finish top if they win and Inter beat Shakhtar, but they could also finish bottom if they lose and Inter win.

The Germans lost 3-2 to Inter Milan later on Tuesday to at least keep Real's fate in their own hands but a drastic improvement will be needed.

Zidane said after the loss: 'I feel strong and I am going to keep giving everything as always'

'I am not going to resign. This is a difficult moment but we have to show our pride and our character.'

Real have already lost five matches this season, which certainly constitutes a crisis by their lofty standards.

As well as the home and away defeats to Shakhtar, they have been beaten by Cadiz, Valencia and Alaves in LaLiga, where they currently sit in fourth place, some seven points adrift of leaders Real Sociedad.