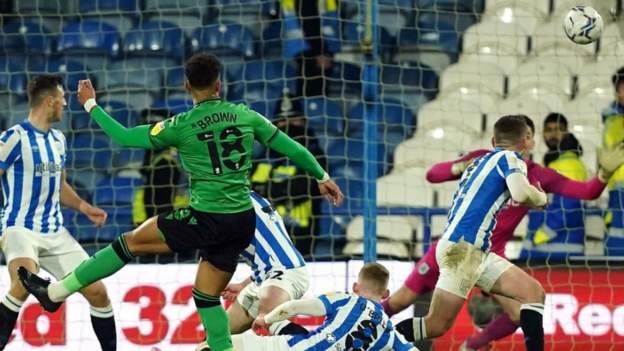 It looked like the Potters' luck was out when Josh Koroma's hugely deflected goal put the Terriers ahead just six minutes after he could have been sent off for a totally unpunished knee-high challenge which connected with on-loan Stoke defender Taylor Harwood-Bellis.

Stoke then had two strong penalty claims turned down before they finally drew level when Brown shot home from 18 yards, after on-loan Aston Villa midfielder Jaden Philogene-Bidace had been denied by the post.

That was enough to lift Stoke a place to 10th before the rest of the weekend Championship fixtures.

In the end it was a fair result from a game which began slowly, with the hosts in the ascendancy, but ended with Stoke on top, regenerated by the half-time arrival of Wales midfield dynamo Joe Allen and supplemented by the introduction of fit-again Nick Powell and Scotland international Brown.

It could also have ended so differently had referee Gavin Ward viewed two key moments in a different light as, in the space of less than 10 first-half minutes, Stoke suffered three horrendous moments of fortune.

First, on 21 minutes, Harwood-Bellis - on loan from Manchester City - got caught on the knee by a shocking studs-first challenge from clumsy home striker Koroma.

Then just six minutes later, Koroma opened the scoring with a right-foot shot that took a big deflection to loop over Potters keeper Jack Bonham.

And almost straight after the goal, Stoke were denied a chance to equalise when they had what looked a stonewall penalty claim turned down after Tyrese Campbell went down in the area under a challenge from home defender Tom Lees.

But, despite having lost six of their previous nine league games, O'Neill's Potters showed what they are made of and fought back well, especially after being turned down with another shout for a spot-kick.

They finally got their breakthrough when Philogene-Bidace pounced to intercept a loose pass before blasting a right-foot shot against the left post, which rebounded across the box to Campbell.

But Ben Wilmot calmly picked up the loose ball, squared to his left and Brown let fly with a superb right-foot strike which flew into the net and beat the keeper all ends up.

Attempt saved. Jacob Brown (Stoke City) right footed shot from the right side of the box is saved in the centre of the goal.

Jacob Brown (Stoke City) wins a free kick in the attacking half.

Taylor Harwood-Bellis (Stoke City) wins a free kick in the defensive half.

Phil Jagielka (Stoke City) wins a free kick in the defensive half.

Oliver Turton (Huddersfield Town) wins a free kick in the defensive half.

Lewis O'Brien (Huddersfield Town) is shown the yellow card for a bad foul.

Lewis Baker (Stoke City) wins a free kick in the defensive half.