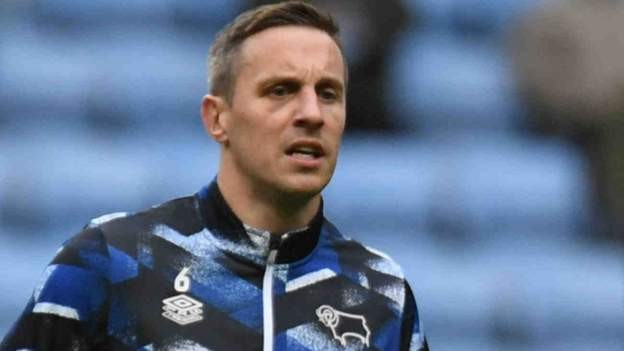 Phil Jagielka has now played over 600 league games during his career with Sheffield United, Everton and Derby, on top of his 40 England caps

Jagielka had to be released by Derby on Friday morning after the EFL refused to sanction a contract extension as they wait for funding proof for the rest of the season from Derby's administrators.

Stoke are favourites to secure 39-year-old Jagielka, having acted quickly.

Jagielka joined Wayne Rooney's Derby on a short-term deal in the summer after he was released by Sheffield United.

His deal was not due to expire until Monday but given there was no chance of an extension, Derby released Jagielka immediately.

Rams manager Rooney was keen to persuade Jagielka, who has made 21 appearances for the Championship's bottom club, to remain at Pride Park. He has been on the losing side in just six league games.

Stoke have been looking for a new centre-half since Australia international Harry Souttar was sidelined for the season on World Cup duty in November.

They had been linked with his brother John, the Hearts and Scotland stopper, but reports have now indicated that he will go to Scottish champions Rangersexternal-link.

Stoke's other main long-term injury absentee is striker Nick Powell, who suffered a setback in his recovery from a broken fibia prior to Christmas.