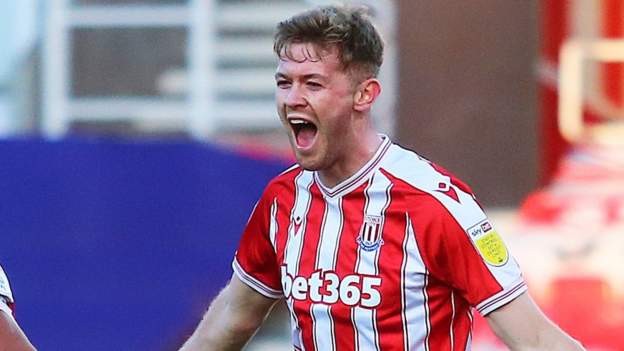 Stoke moved up to fifth in the Championship as a header from Nathan Collins proved enough to defeat Neil Warnock's Middlesbrough.

The Potters made the better start and were rewarded when the Irish defender headed home Morgan Fox's cross.

They almost doubled their lead when Middlesbrough forward Chuba Akpom inexplicably headed towards his own goal but Marcus Bettinelli saved.

George Saville's shot against the post was the closest Boro came to a reply.

Stoke overcame the early loss of Sam Clucas to injury to claim back-to-back 1-0 wins and their third consecutive clean sheet.

Collins' header was the first meaningful action, with the defender nodding home after finding himself unmarked in the Boro penalty area.

It was almost two for the home side in bizarre fashion as Akpom headed back towards his own goal from a free-kick, forcing Bettinelli into a smart save.

The visitors were struggling to create chances and but did come close in the 38th minute when Saville struck the post after Marvin Johnson's effort had been palmed away.

Boro boss Warnock made a triple change shortly after the hour mark when Duncan Watmore, Britt Assombalonga and Patrick Roberts entered the fray.

But the substitutions had little effect with Stoke's top scorer Tyrese Campbell missing an opening to make the winsafe.

Dael Fry saw a late volley blocked by James Chester but Boro only managed one shot on target all game and they remain 10th, while Stoke moved into the play-off places.

Jacob Brown (Stoke City) wins a free kick in the defensive half.

Attempt missed. Lewis Wing (Middlesbrough) right footed shot from outside the box misses to the right.

Lewis Wing (Middlesbrough) wins a free kick in the attacking half.

Patrick McNair (Middlesbrough) wins a free kick in the defensive half.

Attempt blocked. Dael Fry (Middlesbrough) left footed shot from the centre of the box is blocked.

Attempt blocked. Jonny Howson (Middlesbrough) right footed shot from the centre of the box is blocked. Assisted by Djed Spence with a headed pass.

Attempt missed. Tyrese Campbell (Stoke City) left footed shot from the left side of the box is high and wide to the left. Assisted by Jordan Cousins following a fast break.