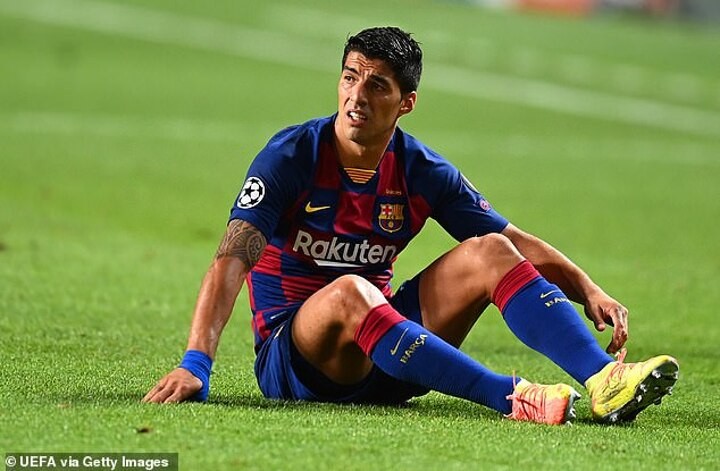 Luis Suarez felt he 'deserved more respect' from Barcelona last summer as he was left angry at their reasoning for forcing him out.

Ronald Koeman succeeded Quique Setien and made it clear to Suarez that he would not be part of his plans going forward.

Suarez, who is now LaLiga's top scorer this season with Atletico Madrid, claims Barcelona told him he was too old 'to play at the highest level' despite the 34-year-old making a mockery of such a suggestion since winding up in Spain's capital.

'What really bothered me was when they told me that I was old and that I could no longer play at a high level, be up to [the task of fronting] a great team,' Suarez told France Football. 'That's what I did not like.'

He added: 'If I hadn't done anything at a club like Barca for three or four seasons, I would have understood. But, every year at Barca, I scored more than 20 goals per season. I have always had good statistics, just behind Leo (Messi).

'Today, we can see that it is not easy to play at Barca ... A lot of players who signed there did not have the level that was expected of them. Me, I played for six years at Barca maintaining a certain level and living up to what was expected of me.'

Lionel Messi, a close friend of Suarez, called the Uruguayan's exit as 'crazy' and Suarez has shown it was a hasty decision as, along with Messi, he stands top of the scoring charts with 16.

Atletico are LaLiga leaders and since Suarez's departure Barcelona have found life tough domestically and in Europe.

'At Barca, circumstances have changed, the club needed changes,' he added.

'And I accepted it. The only thing that bothered me was the way [it happened]. I think I deserved some respect.'

Suarez surpassed 20 goals in every season he spent at Barcelona with his best campaign coming in 2015-16, when he scored a stunning 59 goals across all competitions.

Suarez's glittering career at the Nou Camp - which saw him win a Champions League and four LaLiga titles - came to an unceremonious end last summer.

Picked up by Atletico in a deal eventually worth £5million, many observers suggested Suarez was on his way out of the game with his goal return declining year-on-year.

But he has continued to show his critics he remains at the peak of his powers as he looks to guide Atletico to a famous LaLiga and Champions League double.

Suarez will be the centre of attention on Tuesday in Bucharest when Atletico face Chelsea in the first-leg of their Champions League last-16 tie.