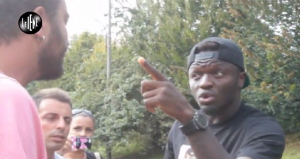 Ghana midfielder Sulley Muntari is in the news for violence again as the AC Milan ace launched a furious verbal attack on a pranking Italian television presenter, smashing his tablet to the ground, before threatening to 'break his face'.

The AC Milan sparked into a threatening verbal tirade on Wednesday when the famous Italian television presenter, Stefano Corti, whose showÂ Reservoir Dogs is known for pranks and jokes, approached the Ghanaian with his latest round of jokes and pranks on his tablet.

But Muntari did not take kindly to what was shown him on the device as he snatched the tablet and smashed it to the floor in a furious rage while the whole incident was being filmed. 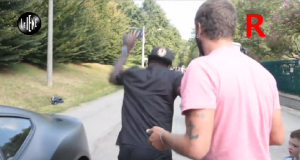 Muntari smashing the presenter's tablet to the floor
The television show which jokes about everything in the Italian society had the presenter showing Muntari fake edited video showing the Ghanaian naked with other AC Milan playersÂ Maxi Lopez, De Rossi and Borriello in what looked like in a homosexual relationship.

While the AC Milan players in the video laughed over it knowing that it was meant for the funnyÂ Â Reservoir Dogs show, Muntari did not take it lightly to be depicted as a homosexual owing to his strong Islamic beliefs.

Immediately he was shown the video on the tablet, the Ghana star reached out of the device before smashing the tablet to the floor, damaging it in the process. 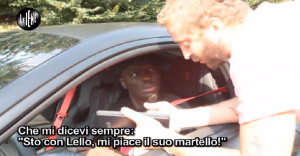 Muntari being show the video on the tablet
He fired a warning to the television presenter Corti that he will physically attack him in future if he repeats the prank.

â€œYouâ€™re sick, I do not joke about these things. The next time you make a thing like this Iâ€™ll break your face," Muntari warned the television presenter after smashing his tablet.

This is the second time in six months that the Ghana star is in the news for violence as his infamous attack on a Ghana FA management member at a meeting at the World Cup in Brazil. 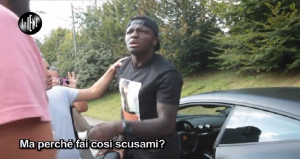 Muntari storms out of his car to issue verbal tirade
Muntari physically attacked management member Moses Armah with two deadly blows before the owner of Medeama was sparked into dishing out his reply with a blow.

The AC Milan star followed the businessman to his hotel room after the attack in the meeting room seeking further attacks and when he was unsuccessful he broke his laptop and mobile phones by smashing them to the ground like he did to Corti's tablet. 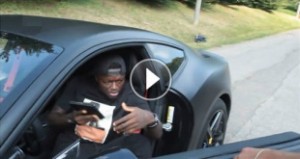 Muntari with the television presenter
Muntari was sacked from the World Cup in disgrace over the incident. Armah broke his silence on the issue yesterday at the World Cup commission revealing it was an unprovoked attack.