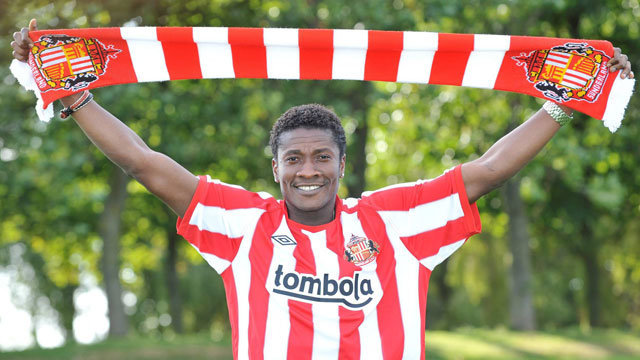 Sunderland boss Martin O'Neill plans to contact striker Asamoah Gyan next week amid speculation he could be recalled from his loan spell in the United Arab Emirates.

The 26-year-old was loaned to Al-Ain in a deal worth around Â£6million to the Black Cats in August after becoming unsettled at the start of the season. His departure left the club short of frontmen, and O'Neill was forced to start with teenager Connor Wickham after just two days of training following a knee ligament injury for his first game in charge against Blackburn last weekend.

It is understood the prospects of Gyan returning to Wearside this season are remote, but O'Neill still plans to make a call out of courtesy. He said: "The chief executive gave me his number, I haven't had a chance to call it."

O'Neill added: "Really, it was just a matter of me introducing myself to him as much as anything else and finding out how the land lies.

"I think perhaps the club he is involved with have got a pretty strong hold on him in many aspects, but still it would be nice just to have a few words.

"That I intend to do some time next week."

O'Neill could be boosted for Sunday's trip to Tottenham by loan signing Nicklas Bendtner's return from the groin problem which sidelined him last Sunday, while Fraizer Campbell's comeback from another serious knee injury gathered pace on Thursday when he took part in a training ground match.