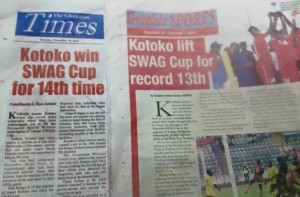 The Sports Writer Association of Ghana (SWAG) have cleared the disagreement over the number of SWAG Cups won by current champions Kumasi Asante Kotoko explaining the years the Porcupine Warriors won the cups.

Two of Ghana's leading newspapers, The Ghanaian Times and The Graphic Sports had each reported different number of SWAG Cups won by the current champions with one reporting 13 while the other reporting 14.

But the organizing body in a statement have cleared the disagreement specifying the number of trophies the Porcupine Warriors have won.

In the statement, SWAG explained that the Porcupine Warriors have won the cup for the 14th time spelling out the various years the y won the trophy.

Below is the statement:

"The Sports Writers Association of Ghana (SWAG) wish to bring to the notice of the public, that the recent victory of Kumasi Asante Kotoko over Ashgold in the SIC Nyemitei SWAG Cup, made it the 14th time, the porcupine warriors have won the trophy since its commencement in 1972.

Kotoko defeated Ashgold by a lone goal at the Baba Yara Sports Stadium, Kumasi, courtesy Eric Donkor's free kick to win the trophy for the 14th time in a match patronised by the Asantehene Otumfuo Osei Tutu II.

It has become necessary for the Association to resolve the confusion over the number of times, Kotoko has won the competition, since some media outlets pegged it 13.

Kotoko has won the trophy more than any club in Ghana, with a record 14 times, with Hearts winning on five occasions, Ashgold - four , followed by Sekondi Hassacas who have won the trophy on two occasions.

It is the hope of the association that the confusion over the number of times Kotoko have won the cup will be put to rest as the association seeks to work around the clock to make future competitions a success.