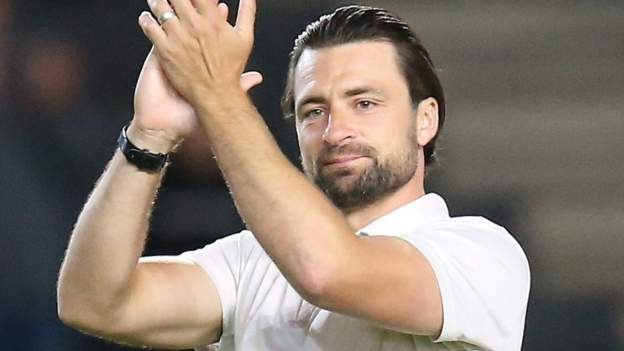 Swansea City have made an approach for MK Dons manager Russell Martin.

The Swans have been looking for a new boss since the departure of Steve Cooper earlier this month.

After Queens Park Rangers assistant manager John Eustace rejected the offer to succeed Cooper, Martin and former Chelsea assistant Jody Morris have been the leading contenders for the job.

Martin has impressed in his two years in charge of League One MK Dons, where his contract expires in 2022.

As a result, Championship side Swansea would need to pay compensation - understood to be around £400,000 - to prise the former Scotland defender away from Stadium MK.

Alongside assistant manager Luke Williams, Martin has earned praise for the intricate, possession-based style of play he has instilled in his team.

He guided the club to a 13th-place finish in League One last season.

Martin is believed to be open to the idea of taking the Swansea job but he would like the opportunity to strengthen the squad.

That would likely have to be in the form of loans and free transfers given how little money the club's owners made available to Cooper.

As well as Ghana forward Andre Ayew, whose lucrative contact had expired, the Swans have lost the likes of goalkeeper Freddie Woodman and defender Marc Guehi after their loans ended.

Time is of the essence in the Welsh club's search for a new manager, with their first game of the season away against Blackburn Rovers on Saturday, 7 August.