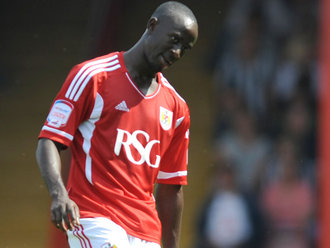 Bristol City are facing an uphill battle to keep hold of star player Albert Adomah, who is wanted by Swansea City.

The Premier League outfit are targeting the Ghana international to replace Manchester City-bound Scott Sinclair and are set to offer City Â£2 million for the winger.

Swansea's interest in Adomah was first reported in May when conversations took place at boardroom level between City chairman Keith Dawe and Swans chief Huw Jenkins.

But The Post can reveal the Welsh club have since firmed up their interest and tested City's resolve with a formal bid. City are holding out for a fee in the region of Â£2.75m and Swansea are set to come back in with an improved offer once Sinclair completes his proposed move to the Premier League champions.

Although Swans manager Michael Laudrup does not want to lose Sinclair, contract talks with the former Bristol Rovers and Chelsea starlet have reached an impasse and the Welsh club are ready to cash in now rather than see one of their prized assets become a free agent and leave the Liberty Stadium for nothing at the end of next season.

Swansea will use the cash they receive for Sinclair to fund transfer deals for Adomah and Kaiserslautern striker Itay Shechter.

Adomah's agent is keeping him informed of the latest developments and the former Barnet winger, who was signed by then-City boss Steve Coppell two seasons ago, is keen to speak to Swansea.

Although Adomah has two years to run on his contract and manager Derek McInnes would like him to stay at Ashton Gate, every player has his price and an improved offer from Swansea is likely to be accepted.

Former Nottingham Forest winger Paul Anderson recently joined City on a free transfer and could serve as a replacement for Adomah.

Fulham are also interested in Adomah, but have yet to table a bid. Short of funds at present, the London club are lining up a player-plus-cash deal, But Swansea are closing in and are in pole position to clinch a deal before the weekend.