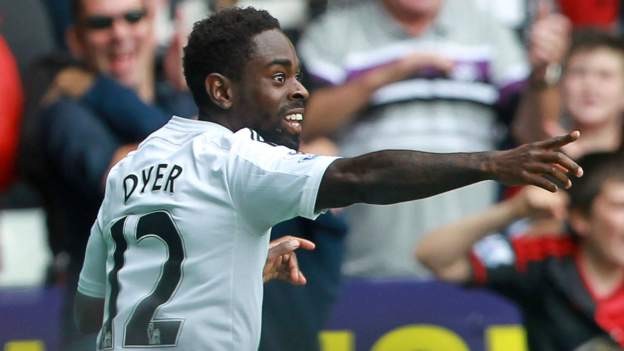 Swansea City winger Nathan Dyer has announced his retirement from professional football at the age of 33.

The former Southampton trainee spent 11 of his 15 years in the game with Swansea, joining them first on loan in January 2009 before a permanent move the following July.

Dyer played more than 250 games for the Swans, helping them win the League Cup and gain Premier League promotion.

"It's the right time for me to announce my retirement from football," he said.

"I have had a lot of thought about it over the last couple of months, and I think it's the best decision for me to step away from playing."

Dyer last played for Swansea on 7 March 2020, the last game before the Covid-19 lockdown, and his contract ran out later in the season.

He has since been on a training contract with the Championship club, which has now expired.

"It was a weird one because when Covid hit the first time around, the season went on longer than usual," added Dyer, speaking to the club website.

"I signed back with Swansea until January under a training contract to give me time to find somewhere, which I was grateful for.

"I was ready to move onto the next chapter and I had a lot of offers from abroad and in the UK. Some of them weren't right for me, so when my contract to train with Swansea was up I wasn't too sure whether I wanted to keep playing or finish. So I took my time to reach a decision.

"Football can be full of highs and lows - you're rarely in the middle. That was the end and, looking back, it's hard because I didn't get the chance to say goodbye.

"Hearing the fans cheering my name was amazing and I like to think I gave them a lot of reason to smile over the years too. They helped me massively and got me going when I wasn't going.

"I like to think they knew I gave 100% every single time I played."

Dyer confirmed that he would not go into coaching, but instead would look to "be a mentor for the younger generation coming through".