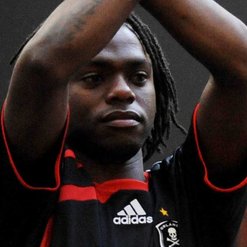 Veteran Swazi international midfielder Dennis â€˜Yukiâ€™ Masina has been recalled to the national team to help them defeat Ghana in their African Cup of Nations qualifier next month.

Masina has responded by declaring that he is ready to feature for Sihlangu in the tough game against the World Cup quarter finalistsÂ to be played at Somhlolo National Stadium. The veteran Masina, who is on the verge of being off-loaded by South Africaâ€™s Orlando Pirates, has been recalled to the national squad after being left out of the tentative list that has been in camp for the past four weeks as they prepare to face the Black Stars. Masina has been in contact with the National Football Association (FA) over his return to Sihlangu. "Itâ€™s true, there has been contact with the National Football Association of Swaziland with regards to my returning to the national team," Masina said. "I have always maintained that I will not let down my country and will be available for the match against Ghana in September."

He points out that all the pressure would be on the â€˜Black Starsâ€™ as they are viewed as favourites to win the game.

"We have nothing to lose in that game and they will be under pressure to continue with the same performance they displayed during the World Cup,â€ Masina revealed. Masina reminded fans of the famous 2-1 victory attained by the local squad against the tough-as-a-teak Togo during the 2010 World Cup/AFCON qualifiers about two years ago at Somhlolo Stadium.

He warned that such result bore testimony of the countryâ€™s capabilities to cause major upsets.

"We went in as underdogs when we played Togo in our last AFCON qualifier, but we beat them. It is good that this time again, we will be seen as underdogs when we face Ghana. They are a good team but we will give our best shot as it will be on our home ground." Sihlangu play Ghana in less than three weeks and the locals were narrowly beaten 2-1 by the â€˜Black Mambas of Mozambique in an international friendly match played at Machava Stadium in Maputo last Wednesday.

The squad is expected to resume full-time camp for this game next week as players were released after the Mozambique game.