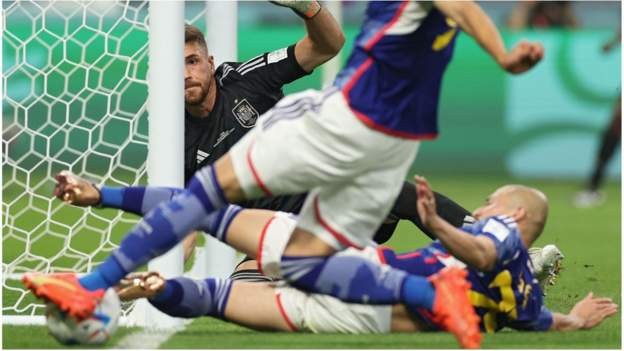 The controversy over Japan's winning goal against Spain, which took them into the World Cup knockout stages, had many people on social media doing the same thing.

With Hawk-Eye goalline technology unavailable and no images released, football fans created homemade versions to demonstrate how the ball could still be in play - despite appearing to have gone out over the byeline just before Ao Tanaka's goal.

The high stakes of the goal - which the video assistant referee (VAR) determined could stand - meant not only that Japan topped Group E, but also that Germany were eliminated, despite beating Costa Rica 4-2 in Thursday night's other match.

ITV pundit Graeme Souness questioned if "something untoward" was going on, while Spain manager Luis Enrique claimed images he had seen after the match "must have been manipulated" and "it cannot be that this photo is real". Fifa declined to comment.

Imagine how social media would have reacted in the days before we were pre-conditioned to technology, such as Frank Lampard's 'goal' for England against Germany at the 2010 World Cup. And the eternal debate over whether Sir Geoff Hurst's goal that made it 3-2 to England in the 1966 World Cup final against West Germany crossed the line.

These days, we have an army of digitally literate football fans ready to pore over every decision and provide their own evidence.

In the aftermath of Wednesday's fixture, people online have taken matters into their own hands - demonstrating how a ball can still be in play, even when some camera angles suggest otherwise...

Some in Japan have used graphic design skills to illustrate further...

There was no sympathy over in Brazil, where supporters haven't forgotten about the humiliation of a 7-1 defeat by Germany in the semi-finals of their home World Cup in 2014.

This tweet translates as: "Look how the ball was in - Japan's goal validated by VAR! A millimetre that made the joy of millions of Brazilians."

Meanwhile, a new design for Japan's national flag has been submitted...

We can't believe we didn't think of this.

Japan will now face Croatia in the last 16 on Monday (15:00 GMT kick-off). Meanwhile, Germany are officially in 'fallen giant' territory after failing to make it out of the group in both World Cups since they won the tournament in 2014.