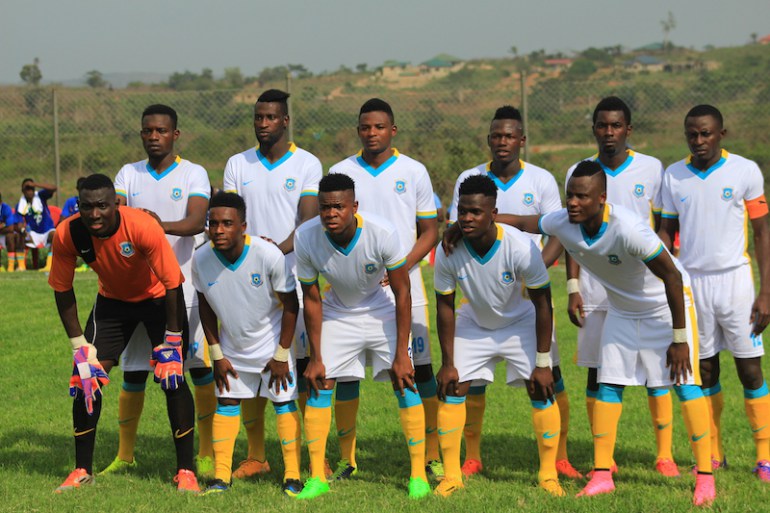 PERFECT THREE!!!, As Hans Kwofie bags first hattrick of the season. Premier league action entered its second week with teams sizing up their fortunes in what promises to be another enthralling long haul.

Ashanti Gold FC and Great Olympics got the weekend proceedings underway at the Len Clay on Saturday. Ashgold’s Hans Kwofie was a tough customer for Olympics as he cut them open not once but three times to put the game to bed. Olympics could only manage a late consolation to salvage some pride.

West Africa Football Academy were at their usual best at home, dispatching Ebusua Dwarfs in a convincing 2-0 victory.

Aduana Stars look to have taken serious lessons from their calamitous start to their last term. The Dormaa based club have not put a foot wrong this season with highly motivated Elmina Sharks being the latest to fall to their might. Godfred Saka’s lone goal sealed victory and marked the first ever competitive win at the Nduom stadium in Edina.

Bernard Arthur and Gerald Ackeson seized the initiative and sealed Liberty Professional’s first win of the season against Inter Allies.

Teeming fans of Hearts of Oak bounced up and down in anger following their side’s uninspiring goalless draw against Medeama SC at the nation’s wembley. It was everything short of excitement with wilt and bluntness  at the heart of the home side’s performance on the afternoon.

Berekum Chelsea and Asante Kotoko played out a barren draw in a keenly contested tie at the Golden City park.

Ghana’s expedition in African club football in the last decade has been marred by lacklustre and wilt filled performances. The Centre has not held since Hearts of Oak and Asante Kotoko graced the final of the maiden edition of the African Confederations cup finals with the Ghanaian football artistry and glamour. Thought to be only a blip when it all started, it has blown out of measurable proportions and the dent on the country’s image on the continent seems irreparable for now.

In seven days, Ghana’s representatives in continental competitions, Wa All Stars and Bechem United have crashed out in a rather humiliating circumstances per our high standards. It appeared a stroll in the park over the weekend when Al Ahli Tripoli hosted Ghana’s champions Wa All Stars in the return leg of the preliminary round of the CAF Champions league. Having humbled All Stars in the reverse fixture in Ghana a week ago, Al Ahli had the luxury of lifting their foot off the pedal and still affording a comfortable 2-0 win at their adopted home, El Menzah in Tunis.

MC Alger quenched the little flicker of hope Bechem United gave mother Ghana by trouncing the Ghana FA cup holders 4-1 to overturn the 1 goal deficit from the first leg. Both teams have only continued a woeful trend which has rendered club football in Ghana a laughing stock.

Another year and a no show by Ghanaian clubs on the continent yet we remain rooted in our cluelessness as an artisan in a surgery room.

“Awurade bɛgye steer no o” as we sink in deep waters with a dry dock nowhere close.