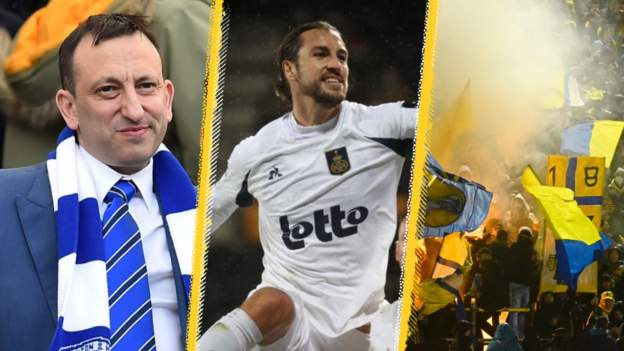 But that is exactly what has happened at Royale Union Saint-Gilloise, the Brussels-based club currently topping the Belgian First Division A in their first season back in the top flight after 48 years in the wilderness.

Brighton owner Tony Bloom, who helped end the Seagull's 38-year top-flight exile in 2017, bought Union three seasons ago and - after last season's promotion - now has the club top of the table after 17 matches, ahead of the likes of Club Bruges, Antwerp and Anderlecht.

Despite their provincial, underdog status, embodied by a stadium with a capacity of less than 10,000, Union is a club with 11 first division titles to their name, all coming between 1903 and 1935.

They are the third most successful club in Belgium; this isn't the fairy tale rise of a minnow, it is the reawakening of a former giant.

'Everybody wants to be part of something unique'

Bloom, who after a Europe-wide search for investment opportunities with Alex Muzio - now club president - settled on Union because of its location and history, isn't the only British influence involved in Union's rise.

Former Portsmouth centre-back Christian Burgess - who has 200 English league appearances to his name - and ex-MK Dons wing-back Matthew Sorinola are key players among their ranks.

And Belfast-born Chris O'Loughlin is the sporting director - he focuses on recruitment and works closely with head coach Felice Mazzu.

"There was always a strong fanbase here, and it is a diverse area," O'Loughlin, whose CV includes stints coaching at Orlando Pirates, Charlton Athletic and Belgian clubs KV Kortrijk and STVV, before taking up his first director's role with Union in 2019, tells BBC Sport.

"I won't say it was a blank canvas, but there is more of a chance to build and put structures in place and to create. Everybody wants to be part of something unique and something special. Everyone is open to new ideas and developing both professionally and personally.

"It is exciting that we are looking at different advantages in the direction football is going. It is a developmental stance, not just with recruitment but in terms of culture, medical, coaching and infrastructure.

"The culture inside the team is important. We have people coming from different backgrounds, different education levels and from all over the world.

"We are not going to be successful if we work only as individuals. We have core values and it is important that we find examples of those."

Thirty-year-old Burgess joined the club last season after five years with Portsmouth. He was Pompey's player of the season in 2020 and his move to Belgium's second division from a Championship-chasing side raised plenty of eyebrows.

The ex-Arsenal youth and former Middlesbrough player soon settled though, living in Antwerp, around 45 minutes outside Brussels to be closer to Union's training base, and taking French lessons.

"I visited the club and saw the training ground, it was obviously really professional," he said.

"On my first day of training, I didn't know what to expect. I had no idea of the standard of the league or the team. I went off Chris' vision and the history of the club; the chairman's plans and willingness to help, too.

"Everyone is so friendly. I've had friends come over on their own and they get chatting to the locals who want to know where they've come from and what they're doing. People come from all over Europe to watch as well."

He also lauded the team spirit after one of his team-mates, striker Dante Vanzeir, received a first Belgium call-up last month, as Union bid to earn Champions League football for next season and end their 86-year wait for a 12th title.

"We all gathered for a live stream of the national selection with Roberto Martinez," he recalls, speaking the week after a 7-1 win away to Oostende on November 21, during which he scored twice and Undav grabbed four.

"Everyone was just desperate to hear his name and when we did, we all went crazy. It was a brilliant moment.

"We are taking things game by game. Before the Anderlecht opener, we weren't sure how we'd do, so winning that like we did gave us belief and brushed away any doubts anyone had.

"Lots of people are talking about what could happen and it is nice, but there is such a long way to go.

"We just have to stay focused but we have a good mentality; our secret is how hard everyone works for each other."