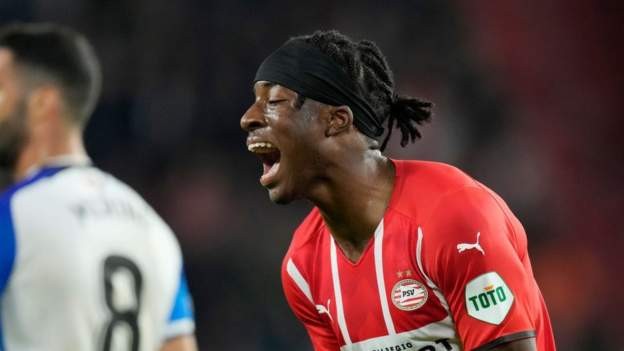 The Barnet-born 19-year-old enjoyed a breakout campaign in the Netherlands last season, scoring nine goals and registering eight assists. His form earned him a call-up for England's Uefa European Under-21 Championship last March and caught the attention of clubs from back home and farther afield.

And if his style as a direct, powerful and versatile attacker sounds familiar, that's because it was inspired by one of the Premier League's biggest names.

"The person that made me want to play football was Cristiano Ronaldo when he was playing for Manchester United," Madueke tells BBC Sport. "He was my idol. I grew up watching him."

Despite his allegiance to United, Madueke rejected the opportunity to join them in favour of a switch he felt better served his progression. He had been thriving in Tottenham's youth teams when, in the summer of 2018, aged 16, he decided to move in search of a faster route to senior football.

United were one of several top clubs who wanted Madueke, but he opted for the first-team pathway on offer at PSV.

"I came here one time and as soon as I came I wanted to sign straight away. I knew going from Tottenham to United is pretty much the same thing. The reason I wanted to go was to progress quicker into the first team. PSV is a top European club. It made so much sense at the time and it makes sense now."

At PSV, Madueke was able to learn at the prolific feet of a Premier League great. He credits former Manchester United striker Ruud van Nistelrooy - the manager of Jong PSV, the club's second string - with sharpening his scoring instincts.

"Ruud helped me a lot," Madueke says. "I was with him almost two years, from when I came until I went to the first team. I sponged off him and I learned a lot of things."

Vindication for Madueke's Dutch decision came quickly. He stood out in the under-19s and Jong PSV and was handed a first-team debut aged 17, coming off the bench in a 1-1 draw with VVV-Venlo in January 2020.

The teenage winger's ability to adapt to the senior game came as little surprise to those who have worked with him. He has always been developmentally ahead of the curve.

Madueke signed a four-year contract with PSV in August

"He always wanted to do more than everyone else," remembers former Tottenham youth coach Justin Cochrane, now of Manchester United. "If there was a player above him who was doing well, he'd say, 'I can score more goals than him'. He's quite bold; lots of self-belief.

"I've always played a year or two up," Madueke adds. "Playing against bigger, stronger physically, better opponents is nothing new to me. I think that's why I took to first-team football pretty easily."

Shortly after Madueke's debut, the coronavirus pandemic hit. The Eredivisie season was suspended and then cancelled. The youngster found himself away from home in the most uncertain of times. His response was to do all he could to be ready for football's resumption.

"I worked a lot during the pandemic," he says. "I wanted to come back and make a mark in first-team football. I came back and I was able to make my mark straight away. Now I just keep going and going."

That work paid off. Madueke nailed down a regular place in PSV's starting line-up, his form rewarded over the summer with a four-year contract and the number 10 jersey. "I wanted to wear the shirt because the best players wear those numbers and I expect a lot from myself," he says.

His finest performance to date came at the outset of 2021-22, in the Johan Cruyff Shield - the Dutch equivalent of the Community Shield. PSV hammered Ajax 4-0, with the Englishman scoring twice. It hasn't all been plain sailing since. He has suffered inconsistent form and minor injuries, but Madueke's qualities continue to shine through.

"He has had some moments where he has struggled, which is normal for a 19-year-old," assesses Rik Elfrink, who covers PSV for newspaper Eindhovens Dagblad. "His attacking is of great quality, but he has a lot to learn in his defensive work. But I would say the plan [of joining PSV] has worked out almost perfect.

"Hard work, for him, is not a problem. He's a really dedicated guy. PSV is a good surrounding for him. If he later goes to a big club in England, he will be glad that he started his development here."

Madueke played for England in a Euro U21s qualifier against Kosovo in September alongside Manchester City's Cole Palmer, another player who has impressed this season

If reports over the last year are to be believed, big clubs in England - and elsewhere - are watching. Tottenham, Manchester City, Paris St-Germain and Real Madrid are just a selection of the A-list names credited with an interest in Madueke.

But the ambitious, goal-oriented teenager is, for now, focused firmly on unfinished business in Eindhoven.

"I focus well on my own objectives," he says. "I set really high goals for myself. I write notes about what I want to do.

"I just want to win the league and cup and do as well as we can in the Europa League. From an individual standpoint, I just want to improve my level a lot and score lots of goals. That's really it."

The 100 Billion Bottle Problem: Is Coca-Cola's pledge to tackle plastic waste on track?Frankie Boyle's New World Order: The comedian's bold and outrageous way to make sense of the world we live in