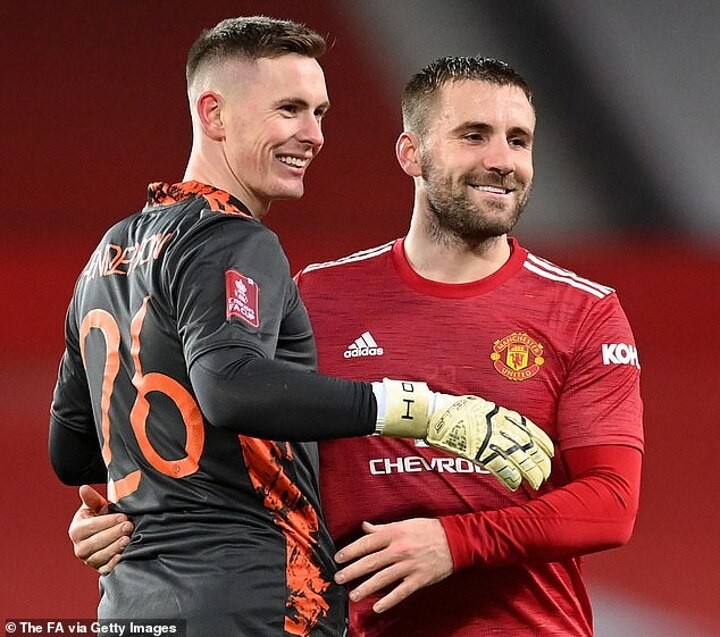 Serge Aurier drags Harry Maguire out of position on the left. Luke Shaw, rather than cover the space left by his captain, goes to mark Harry Kane on the edge of the box as Son Heung-min darts into the area.

David de Gea spots the mistake, but it's too late.

Manchester United's humiliating defeat at home by Spurs back in October appeared to signal the beginnings of drastic change at Old Trafford. That, added to the viral clip of the Red Devils keeper berating his left-back, made for grim reading for the English defender.

But it was Shaw who emerged to face the scrutiny of the television cameras after the 6-1 hammering at the hands Jose Mourinho's side.

'It really hurts. It's embarrassing and we've let a lot of people down,' he said. 'We've let ourselves down and the staff down. We were too quiet and naive. There were many mistakes and we need to do more.

The transformation in results following that Spurs defeat are well documented: 11 wins, four draws and one defeat - 31 goals scored, 14 conceded. The Red Devils can reclaim top spot in the table with victory over basement boys Sheffiield United tonight.

The change has been attributed to Bruno Fernandes, whose monstrous efforts since joining last January have provided a shot in the arm for everyone involved at the club.

But in Shaw, United have a bona fide leader who is hitting his stride at just the right time for Ole Gunnar Solskjaer's side.

Shaw's upturn in form represents a remarkable turnaround for the 25-year-old.

The summer acquisition of Alex Telles from Porto would have come as a stark warning to the full-back, with the Brazilian earmarked as an almost certain starter.

However, Solskjaer has kept the faith in his English full-back, and his man-of-the-match performance at Anfield earlier this month provides a perfect indicator of Shaw's progression this season.

Shaw noted that the defeat by Spurs was largely down to a severe deficiency in concentration across the board.

His aggression in the tackle, tenacity to stay with Mohamed Salah at every turn and intelligent reading of play in making a number of key interceptions shows that there can be no qualms about Shaw's concentration levels now.

Where Fernandes had an off day, Shaw stepped up to the mark. The full-back produced an 81 per cent accuracy with his passes in the Liverpool half (he's 70 per cent for the season), the highest of any United player on the day and his overall passing accuracy in 2020-21 stands at 82 per cent.

United took care of Fulham a few days after the Anfield clash before another meeting with their fierce rivals, this time at Old Trafford with Shaw and Co sealing their place in the fifth round of the FA Cup with a 3-2 win. The left-back should have done better when Salah scored but it was another impressive overall display - he created three chances for team-mates.

Shaw has the top-level experience that belies his years. His versatility in being able to operate as one of a back three - as seen in the superb win at PSG - or in the traditional full-back position provides Solskjaer with the tools to keep rival coaches guessing.

The competition from Telles has only served to light a fire in Shaw's belly to ensure his place in the United XI remains in tact.

Shaw's hamstring injury at Everton threatened to be a huge blow, with Telles given the opportunity to make his case for more first-team minutes. But his mental fortitude to recover from that setback and pick up from where he left off has made him indispensable to Solskjaer.

The United boss is well aware of the talent he has on his hands. Regarded by many as the symbol of the post-Sir Alex Ferguson era, that is, an expensive flop, Solskjaer sees things rather differently.

'Potentially we have the best left-back in England. Luke has the potential to be the best one, and that is the great challenge for him now,' he said before the visit to Anfield in the 2019-20 campaign.

There remains a handful of players who can stake a greater claim to that accolade, but there is no doubting that should Shaw continue in this upward trajectory, he will most certainly ensure his manager's prediction comes to fruition.

More recently, Solskjaer told United's website: 'When you have the talent of Luke, when that fitness and the mental bit is sorted, then you are always going to get good performances.'

England boss Gareth Southgate will surely be watching on with a wry smile. The national team boss does not have the depth of quality he is afforded on the right hand side of defence, with Ben Chilwell his first-choice left-back at present.

Shaw's form has put him front and centre for a call up and his first international cap since England's Nations League defeat by Spain in September 2018.