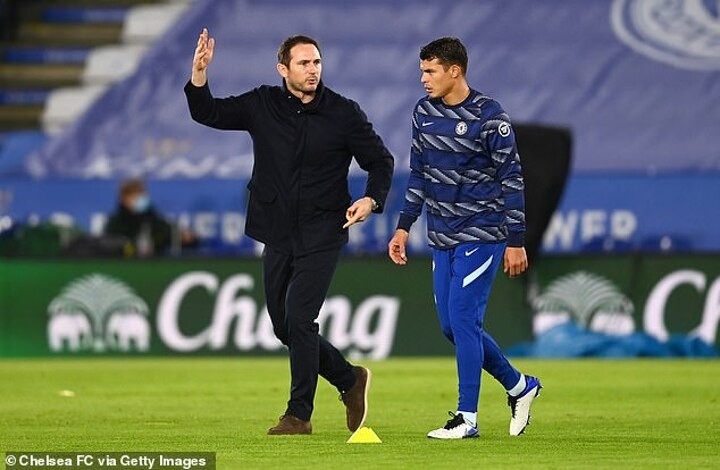 Thiago Silva was the first player to break silence on 'legend' Frank Lampard following his Chelsea sacking – and the Brazilian now faces an awkward reunion with incoming boss Thomas Tuchel.

The former midfielder was dismissed by the club on Monday following a dismal run of five defeats in eight which left the club in ninth-place in the Premier League.

Former Paris Saint-Germain captain Silva, 36, claimed earlier this month that his old manager's sacking at the French club this season was 'predictable'.

With Tuchel now set to take over at Stamford Bridge in time for Wednesday's game against Wolves, Silva may now wish he hadn't made those comments about the German, with whom he won four major honours.

After the 47-year-old was sacked by the Ligue 1 club, Silva – who left PSG to join Chelsea in the summer – told French Broadcaster RMC Sport: 'It's difficult but it was predictable that this was going to happen.

'Not now, but being inside, we knew there were situations that had to be changed. In my opinion, Leonardo took the situation in hand, he made his choice.

'We do not know if it was good, it was not at all for Tuchel and his staff, especially after the match (4-0 defeat of Strasbourg). This change was not planned at this time.'

Silva does not seem to have the same sentiments for his outgoing Chelsea boss, as he took to Instagram to thank Lampard for his help during their short stint together.

'I would like to thank you for everything you and your committee have done for me since the day I arrived', Silva wrote.

'As I told you, it seemed like we had been together for 10 years!! Thank you for everything legend.'

Silva was one of Chelsea's arrivals in a summer spend of over £200million under Lampard.

Confirmation of his sacking came just before 11.30am on Monday after the club took decisive action following a torrid run of five losses in eight league games.

Owner Roman Abramovich, speaking publicly in a statement sacking a manager for the first time, described Lampard as a 'man of great integrity' in the statement confirming his dismissal but added: 'Under current circumstances we believe it is best to change managers' with the club in mid-table.