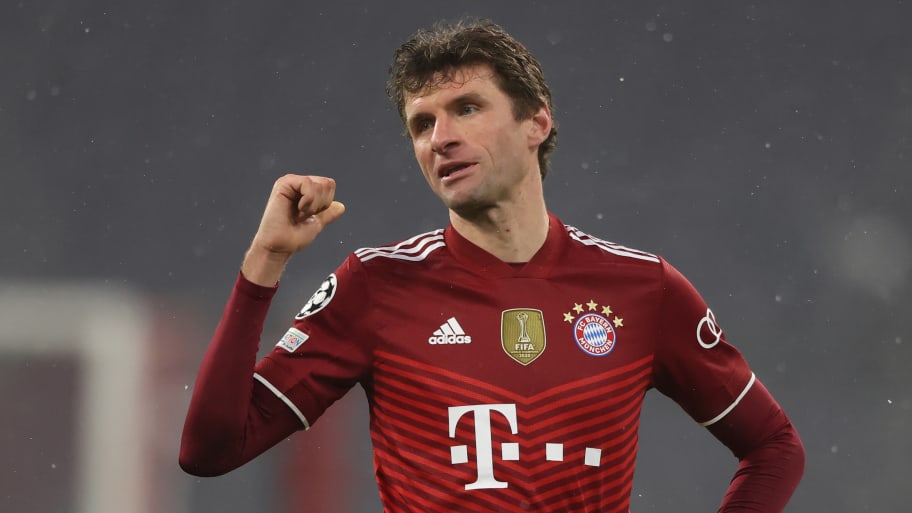 The result meant Barça finished third in Group E, sending them down into the Europa League for the remainder of the season. It was the latest blow in what has been a calamitous campaign for the Catalan giants.

As well as faltering in Europe, they are also a staggering 16 points off the pace in La Liga, and even six adrift of the top four. Off the field, things are similarly bleak with the club's massive debt leading to the departure of several top players including Lionel Messi and Antoine Griezmann.

Despite Barcelona's struggles, Muller was not in a sympathetic mood after helping dump them out of the Champions League.

"I think Barça can't cope with the intensity. Technically, they have it all, they are great players tactically and technically," he said after the game.

"But they can't cope with the intensity in top football."

Muller scored the opening goal of the game, turning in Robert Lewandowski's cross with a looping header. Leroy Sane then made it 2-0 before the break, with his thundering effort from range beating the weak wrists of Marc-Andre ter Stegen.

Barcelona now await which of the continent's second-tier clubs they will be facing off against in the first knockout round of the Europa League.

At full-time Xavi did not hide his frustration at having exited the Champions League at the first hurdle.

"I'm angry," Xavi said. "This is the reality and it pisses me off. We have to tackle it face on. There's nothing else for it. A new era starts today. We start from zero.

"I have seen a very harsh reality, unfortunately sometimes I also lived it as a player and what I have said to the players, we do not have to settle, we have to reveal ourselves. It is difficult to assume it but it is what there is and we need to start from scratch.

"I hoped we would compete better, but we have to be honest and we lack many things. They [Bayern] have been better, superior and although we have tried and pressed hard, they have submitted us, contrary to what we want and this is the harsh reality."

This article was originally published on 90min as Thomas Muller gives brutal verdict on Barcelona after Champions League exit.