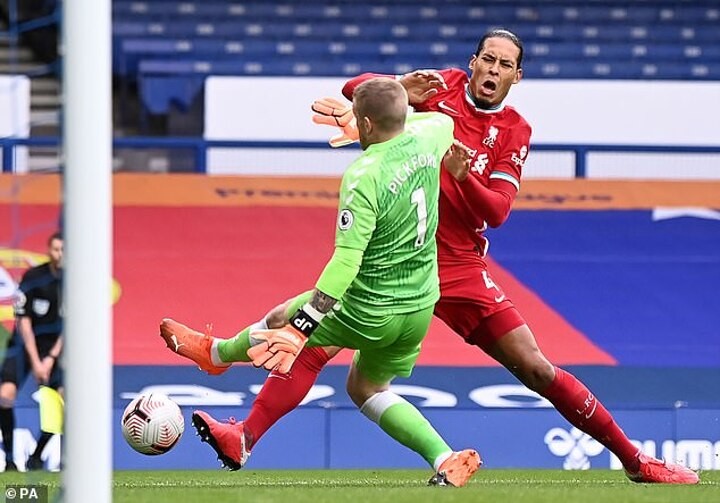 Jamie Carragher believes the title race has been blown 'wide open' after the news that Liverpool captain Virgil van Dijk will need surgery to repair anterior cruciate ligament damage sustained in the dramatic 2-2 draw against neighbours Everton on Saturday.

The 29-year-old was one of the Reds' key figures last season as they ended a 30-year title drought and finished 18 points clear of Manchester City.

However, he was forced off after 11 minutes at Goodison Park after being on the receiving end of a wild challenge from Jordan Pickford, who escaped punishment because the Dutchman was offside but could yet face a retrospective ban.

Jurgen Klopp said after the match that the injury to Van Dijk was 'not good' and scans on Sunday confirmed the extent of the damage.

No time frame has been set for Van Dijk's recovery, but he is expected to be ruled out for the rest of the season.

Speaking on Sky Sports, Carragher said the bombshell news means a new centre back has to be a priority for Liverpool as soon as the winter transfer window opens in January.

'The big question is: can Liverpool win the league without Van Dijk there? Every team has three or four players in every title-winning team and if one of those players is missing, no matter how good your manager is, no matter how big your squad is, you can't cover for them.

'I think it blows the title race wide open. I felt at the start of the season that Liverpool were the team to beat and with Van Dijk being out for what looks like the whole season now, I think it's going to be all on for Liverpool.

'Liverpool certainly have to go into the market in January, not just because of Van Dijk's injury. They were weak in that area anyway - they'd lost Lovren before the start of the season - and the other players who are in those positions are very injury-prone.

'For Liverpool right away it's: who can we get in? I know the transfer window's just finished, but they have to be ready in January to bring someone in. It could stop going on to achieve what they want to achieve.'

Fellow pundit Graeme Souness, who clashed with Carragher over Pickford's role in the incident, believes Liverpool have lost their most important player.

'Liverpool still have enough goals in the team to do it without one of those two [Salah and Mane], but at the back he's [Van Dijk's] the catalyst for everything they do.

'From getting up the field to holding the line when it's the correct time to hold it, dropping off when it's the right time to drop off. It's a major blow. It's the last thing Liverpool needed.'

Liverpool's season has already been hampered by Covid-19, with Thiago Alcantara, Sadio Mane, Xherdan Shaqiri and Naby Keita all testing positive for the virus in the past three weeks.

Jurgen Klopp's men open their Champions League when they face Ajax in Amsterdam on Wednesday.