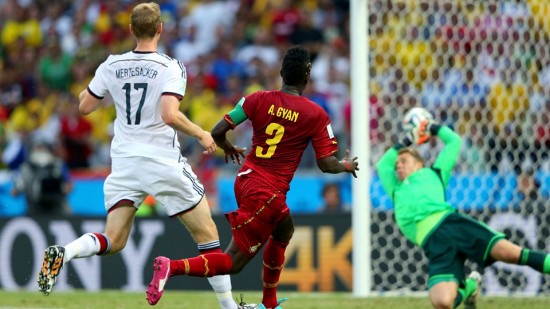 On this day, June 21st in 2014 (8 years ago), Ghana held eventual World Cup winners Germany to 2-2 draw at the Estadio Castelao.

The Black Stars came into the after losing their first group game against favorite World Cup opponents USA by 2-1, whiles the Germans demolished Cristiano Ronaldo’s 4-0 in their first game.

In the stifling heat of Fortaleza, the first half of the game ended scoreless with Ghana creating arguably the best chances of the game and denying their celebrated opponent from creating clear cut chances.

Just six minutes after the restart, the Germans took the lead through Mario Gotze.

There was more drama to come nine minutes later, as Ghana shock the Germans and went ahead for the first time in the game and in the tournament through skipper Asamoah Gyan.

Sulley Muntari capitalized on a rare error from Philipp Lahm in midfield, he slipped a decent through ball to Asamoah Gyan, who made no mistake and cooley hit the ball past Manuel Neuer, 1-2. Asamoah Gyan's goal was his 5th at World Cups, and it meant that he equalled the record of most goals scored by an African at the tournament, one which was held by Roger Milla.

Ghana should have been 3-1 up in the 66th minute and on the verge of securing a famous comeback victory. Jordan Ayew had the chance in what he should have laid a pass to Gyan, but he decided to go for glory himself, but Manuel Neuer collected his effort with ease.

Ghana will live to bite their nails as Miroslav Klose netted in the 71st minute to make it 2-2. He connected with a Benedikt Höwedes flick following a corner.

The goal was his first touch of the game.

The strike was his 15th World Cup goal, he equaled Ronaldo de Lima's World Cup Both teams from then pushed men forward and created good goal scoring chances, but both defenses were on alert to deal with any danger.

The game ended 2-2, Ghana went on to bow out of the tournament after losing 2-1 to Portugal, whiles the Germans defeated USA in the final group game and topped the group.

Germany went on to win the tournament after defeating Argentina 1-0 in Extra time.

Line up for both sides