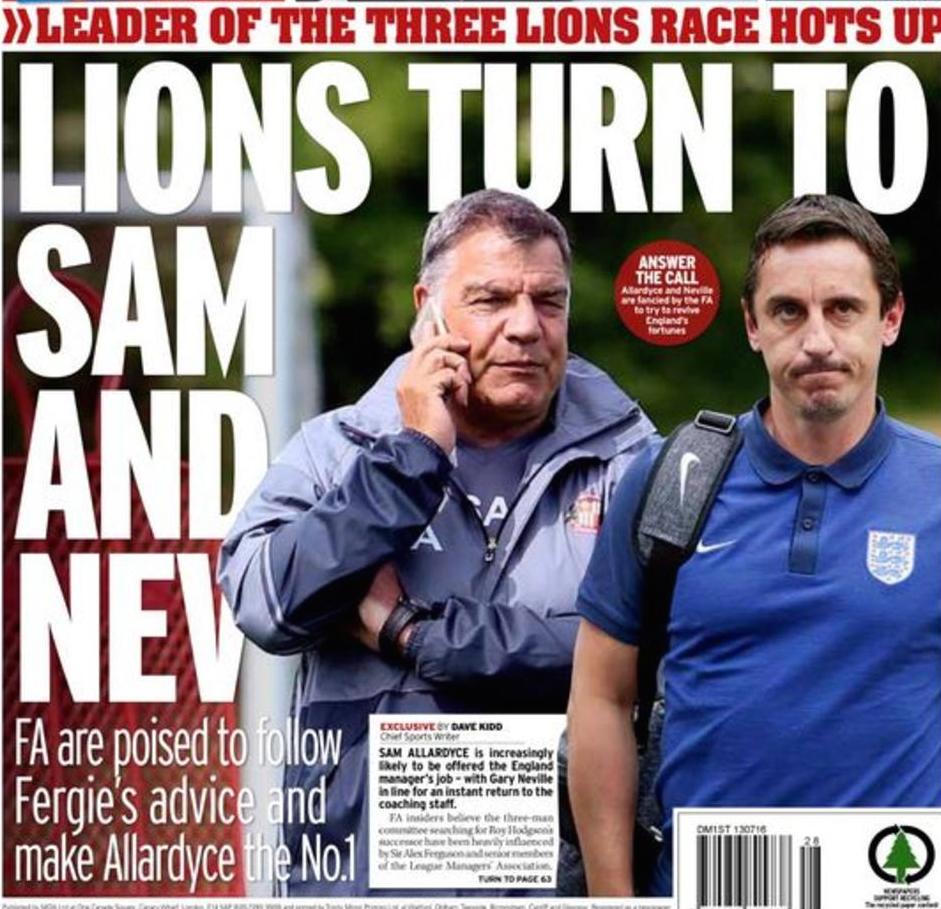 Sunderland boss Sam Allardyce is increasingly likely to be offered the England manager's job, with Gary Neville - assistant coach under Roy Hodgson - in line for an instant return to the coaching staff. (Daily Mirror)

Allardyce met with officials from the Football Association on Tuesday to discuss succeeding Hodgson. (Daily Mail)

Arsenal have had a £25m bid for 21-year-old defender Daniele Rugani rejected by Juventus. (Calciomercato - in Italian)

Chelsea fear they will have to pay more than £50m to sign defender Kalidou Koulibaly, 25, from Napoli. (Evening Standard)

Liverpool and Tottenham have not been put off by Koln's £25m price tag for 26-year-old defender Jonas Hector. (Bild)

Middlesbrough are interested in signing Chelsea defender Tomas Kalas, 23, this summer, according to his agent.(Daily Express)

Leicester and France midfielder N'Golo Kante, 25, deserves to be playing his football for a top club in Europe, says ex-France international Claude Makelele.(Sun)

Swansea are launching an ambitious bid to sign Leicester striker Leonardo Ulloa, 29, as they prepare for the departures of forwards Andre Ayew and Bafetimbi Gomis. (Daily Telegraph)

Wales forward Hal Robson-Kanu, 27, who is a free agent after leaving Reading at the end of last season, has been offered £100,000 a week to move to the Chinese Super League. (Daily Mirror)

Moussa Sissoko's representatives have called on Newcastle boss Rafael Benitez to step into their row with the club over the France midfielder's £35m price tag, which they feel is preventing him from leaving the club.(Daily Mirror)

Newcastle are willing to listen to offers starting at £20m for Sissoko, 26, after his impressive performances for France at Euro 2016. (Times - subscription required)

Marseille will turn their attention to midfielder Carlos Sanchez, 30, after missing out on Aston Villa team-mate Idrissa Gana. (Birmingham Mail)

Italy striker Graziano Pelle has paid tribute to Southampton and their fans on Twitter following his £13m move to Chinese side Shandong Luneng.

David Luiz and some of his Paris St-Germain team-mates have been enjoying a day of rafting during the pre-season trip to Austria.

The Swede also posted a photo of himself on Instagram staring out over the Grand Canyon.

Luke Shaw has two reasons to celebrate on Tuesday - it was his 21st birthday and he is playing again after suffering a double leg fracture in September. Manchester United team-mate Memphis Depay was on hand to mark the occasion on Twitter...

Chelsea's new £33m signing, Michy Batshuayi, had a day to forget while on holiday in Ibiza when his £180,000 Lamborghini was towed away after he left it parked in the shade on a street. (Daily Mirror)