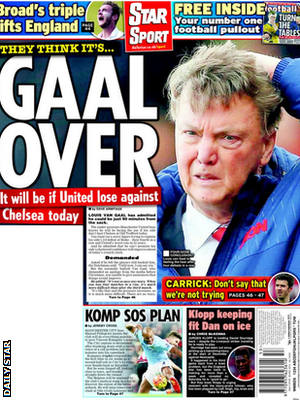 Louis van Gaal's future as Manchester United manager hangs on the outcome of Monday's home match against Chelsea, with defeat likely to cost him his job. (Guardian)

Manchester United have told Van Gaal he has the club's support, but the 64-year-old is still considering resigning and is unsure whether he can transform his side's fortunes. (Times - subscription required)

Former England captain Alan Shearer says the Dutchman should have quit after Saturday's defeat by Stoke, because the performance showed he has already lost the support of his players. (Sun)

Former Chelsea manager Jose Mourinho is resisting the temptation to make a quick return to his former club Real Madrid as he waits to see what happens at Manchester United. (Daily Telegraph)

Arsenal are considering a January bid for former United striker Javier Hernandez. The 27-year-old has scored 19 goals in 21 games for Bayer Leverkusen since leaving Old Trafford for the German club in the summer.(Daily Star)

Liverpool manager Jurgen Klopp says Daniel Sturridge will not be picked for Wednesday's game at Sunderland, despite the 26-year-old striker claiming he is fit. (Sun) 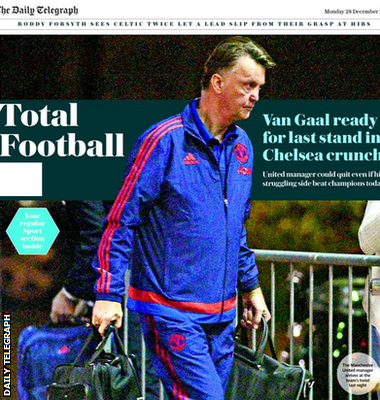 The Gunners' proposed signing of 23-year-old Mohamed Elneny from Basel could pave the way for fellow midfielders Mathieu Flamini, 31, Mikel Arteta, 33, and Tomas Rosicky, 35, to leave the club. (Daily Mirror)

Brazil striker Neymar says talks to extend his contract at Barcelona are ongoing. The 23-year-old's current deal runs until 2018. Neymar has been linked with Manchester City. (AS)

West Ham co-chairman David Sullivan says the club "don't have a penny to spend on wages", and signings in January will only be sanctioned if fringe players can be sold. (Evening Standard)

Swansea are expecting to receive offers for their 30-year-old French striker Bafetimbi Gomis in the January transfer window amid suggestions he could attract interest from the Middle East. (South Wales Evening Post)

West Brom's Darren Fletcher has accused his team-mate Callum McManaman of diving in their defeat by Swansea on Saturday. (Daily Mail)

Leyton Orient have played down an incident in which their owner Francesco Becchetti appeared to kick assistant manager Andy Hessenthaler after the Boxing Day victory over Portsmouth. The League Two club described the incident as "good natured". (Guardian)

The brother of former Newcastle keeper Pavel Srnicek has thanked Magpies fans for singing in a show of support on Boxing Day. Srnicek's family had said they would play a recording of supporters singing 'Pavel is a Geordie' to the 47-year-old, who remains in a coma after suffering a cardiac arrest. (Evening Chronicle)

Despite the speculation surrounding his manager at Manchester United, midfielder Bastian Schweinsteiger's mind remains firmly on Monday's game at home to Chelsea. "Excited about tomorrow's big match against Chelsea!" the German posted on Twitter.

Boxing Day wasn't such a happy occasion for Manchester United or Arsenal, who were defeated 4-0 by Southampton at St Mary's when a win would have taken them above leaders Leicester. To top things off, it wasAaron Ramsey's birthday....

The Gunners face Bournemouth at home on Monday

How about this for a coming together of two of football's finest? "A great meeting with the best... Leo Messi," New York City midfielder Andrea Pirlo posted on Instagram.  ">https://www.instagram.com/p/_ywZnSj2Nv/?taken-by=andreapirlo21">posted on Instagram. 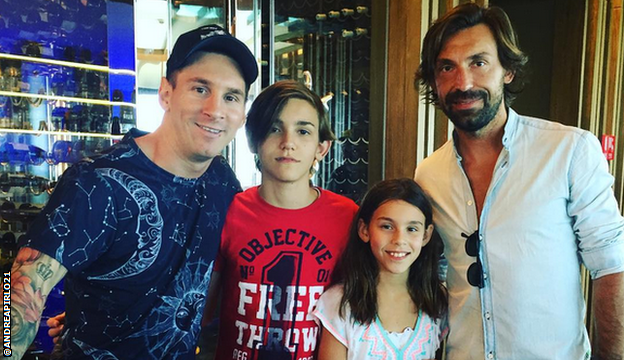 Messi and Pirlo bumped into each other in Dubai, where the Barcelona forward was named Globe Soccer's Player of the Year for 2015 and Pirlo won a Player Career Award

An Australian referee spread some festive spirit by getting players to pull a Christmas cracker instead of tossing a coin before Sydney FC's match with Central Coast Mariners on Boxing Day.(Independent)

Former referee Howard Webb believes that referees made fewer mistakes on Boxing Day because they were chauffeur-driven to matches on the day, rather than having to drive themselves to an overnight stay at a hotel like last year. (Times - subscription required)