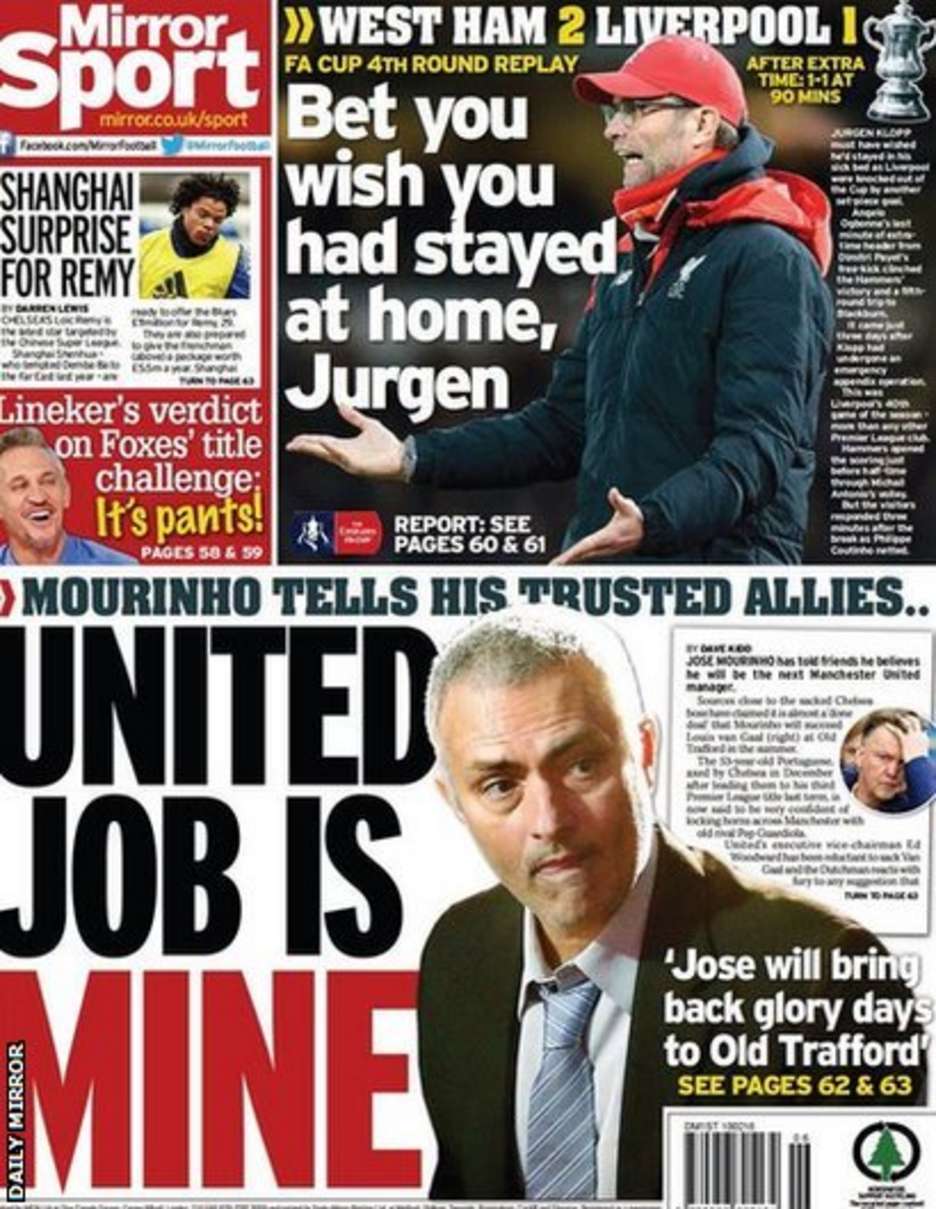 Former Chelsea boss Jose Mourinho, 53, has told friends he is confident he will be the next Manchester United manager, with at least one high-profile football figure describing it privately as a "done deal". (Daily Star)

Mourinho is convinced the job will be his, if the Old Trafford club sack Dutchman Louis van Gaal at the end of the season. (Telegraph)

Juventus coach Massimiliano Allegri, 48, will take up Chelsea's offer to become their new manager in the summer, according to his former boss Giovanni Galeone. (Radio Radio, via Sun)

But former AC Milan and Cagliari boss Allegri has said "there's nothing to" the rumours. (Sky Italia)

Manchester City and Manchester United are ready to fight it out to sign Barcelona's 24-year-old Brazil forward Neymar. (Sun)

Barcelona midfielder Sergio Busquets, 27, says Pep Guardiola - who will become Manchester City manager in the summer - is one of only two people who could convince him to leave the Nou Camp. (ESPN)

Manchester City want to make West Ham midfielder Dimitri Payet the first signing of Guardiola's tenure and are preparing a £30m bid for the 28-year-old.(Sun)

The Hammers have opened contract talks with Payet but have denied reports the player's agent is demanding £125,000 a week for his client.(Times - subscription required)

Chelsea striker Loic Remy, 29, could be the latest player to move to the Chinese Super League with Shanghai Shenhua ready to make an £11m offer for the Frenchman.(Mirror)

Barcelona defender Dani Alves, 32, has been offered a three-year, £9.2m-a-season deal by an unnamed club to become the latest high-profile player to move to the Chinese Super League. (Mundo Deportivo - in Spanish)

Real Madrid are keen to sign Chelsea winger Eden Hazard, 25, before Euro 2016 begins in the summer. (El Chiringuito - in Spanish)

Barcelona, Bayern Munich and Manchester City all want 22-year-old striker Paulo Dybala, who only joined Juventus in the summer from Palermo in a deal that could eventually be worth £30m.(Talksport)

Manchester United are considering a move for Athletic Bilbao defender Aymeric Laporte, 21, as they begin to plan for next season. (Manchester Evening News)

Chelsea could opt to recall defender Andreas Christensen, 19, from his two-year loan spell at Borussia Monchengladbach rather than keep 35-year-old John Terry. (Telegraph)

West Ham striker Nikica Jelavic, 30, is on the verge of joining Chinese second division side Beijing Renhe in a £4m deal. (Daily Mail)

Crystal Palace captain Mile Jedinak, 31, is also being lined up for a summer move to China. The Australia international would not count as a foreign player under league rules. (Daily Mirror)

Robert Lewandowski will not be leaving Bayern Munich this summer, according to the 27-year-old Poland striker's agent Cezary Kucharski.(PolsatSport - in Polish)

Goalkeeper Victor Valdes, 34, says he feared for his life after boss Louis van Gaal made him train alone during the last few months of his time at Manchester United before a move to Standard Liege. (El Pais - in Spanish)

Former Sunderland manager Paolo di Canio, 47, has made a second attempt to become Rotherham boss, following the sacking of Neil Redfearn. The Italian also wanted the job at the New York Stadium in September after Steve Evans left. (Guardian)

George Shaw, a nine-year-old fan with cerebral palsy, won a poll to decide Everton's goal of the month for January for his strike during half-time of the Toffees' home game against Swansea.

Brazilian midfielder Ramires thanked Jiangsu Suning fans for the reception he received when he arrived in China.

Arsenal midfielder Aaron Ramsey showed off his flipping skills on Shrove Tuesday by posting a video on Twitter with the message: "Eyes on the prize #pancakeday #topchef"

Football fans had fun with the new logo for the Premier League, which was made public on Tuesday. This was Paul Townley's Lion King-inspired effort...

An accident-prone cow named after Liverpool manager Jurgen Klopp is being sold at Hereford cattle market to raise money for the St Michael's Hospice in nearby Bartestree. The animal's owner, Tom Pearson, says he named him after the German because "he seemed to be having more mishaps than the Liverpool defence and with a similar expression as Jurgen Klopp reacting to his team letting in a last-minute goal at Anfield".(Western Daily Press)