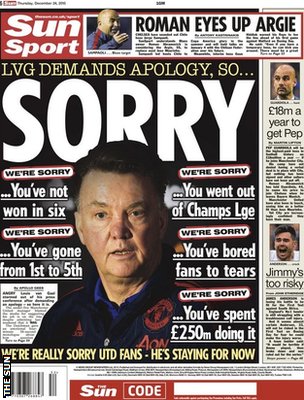 Manchester United are ready to make a move for Bayern Munich coach Pep Guardiola as executive vice-chairman Ed Woodward looks to get in ahead of Manchester City and Chelsea. (Daily Mail)

But Guardiola, 44, would become the highest-paid manager in football history, earning £21m a year, if he joins Manchester City. (Sun)

Chelsea are planning to move for Leicester striker Jamie Vardy, 28, after new interim boss Guus Hiddink was given the approval to make new signings in January. (Daily Mirror)

Chelsea would have to continue paying Jose Mourinho, who was sacked as Blues manager earlier this month, even if he became Manchester United boss. (Telegraph)

The Blues are also considering bids for Juventus midfielder Paul Pogba, 22, and Atletico Madrid striker Antoine Griezmann, 24, in a deal worth £110m and could finance the move by selling forward Eden Hazard, 24.(Daily Star)

The father of reported Liverpool target Marko Grujic has confiscated the passport of the 19-year-old Red Star Belgrade midfielder in an attempt to block a move despite the Serbian club saying they have accepted a £5.14m bid. (Daily Mail)

Tottenham are likely to rekindle their interest in West Brom striker Saido Berahino after Clinton Njie suffered an injury. (Guardian)

Former Liverpool and England keeper David James could be a surprise appointment as the new Luton Town boss. (Sun)

Arsenal full-back Calum Chambers, 20, is heading back to Southampton on loan - 17 months after joining the Gunners from the Saints for £16m. (Sun)

Swansea caretaker boss Alan Curtis may stay in charge for the rest of the season. (Daily Mirror)

Newcastle forward Ayoze Perez, 22, has claimed both Manchester United and Tottenham are interested in signing him but says he wants to stay with Steve McClaren's side. (Radio Club Tenerife, via Metro)

Former Wales, Arsenal and West Ham striker John Hartson reacts to Louis van Gaal's demand for an apology from the media in his own way.

Tottenham striker Harry Kane was told he can match Lionel Messi's scoring record for the year with 21 goals against Norwich on Saturday. "No problem," he said on Twitter.

Leicester City's owners will reward the club's fans at their last home game of the year against Manchester City by giving them all a free beer.(Leicester Mercury)