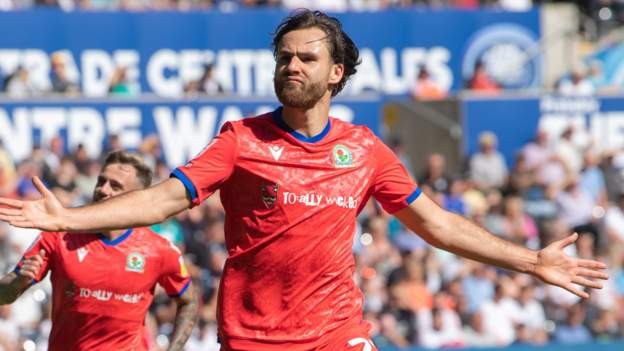 Blackburn Rovers made it six points from six in the Championship this season as they cruised to victory at Swansea City.

Sammie Szmodics swept Blackburn in front 39 minutes into his debut having joined from Peterborough this week.

Ben Brereton Diaz then claimed his first of the season with a classy finish just before the hour.

Swansea already looked beaten by the time Lewis Travis' drive rounded off a fine day for Rovers late on.

New Blackburn boss Jon Dahl Tomasson has enjoyed a perfect first week in the Championship, but Swansea head coach Russell Martin is left with work to do after an uninspiring performance from his team.

Swansea, who looked short of attacking threat, have only one point from their first two games of the new campaign.

This was a meeting of one team who evidently remain a work in progress after a year under Martin and another who are getting used to life after Tony Mowbray.

The Tomasson era began with opening-day victory - and a clean sheet - against Queens Park Rangers.

There was more good news for Blackburn in a tepid first half at the Swansea.com Stadium, where the hosts controlled the ball but Rovers took charge of the scoreboard.

Swansea only once looked like scoring, when Michael Obafemi stretched to head Ryan Manning's cross up in the air when Joel Latibeaudiere looked better placed at the far post.

Joel Piroe latched onto the loose ball but could only flash a shot narrowly wide.

Rovers rarely threatened either, but went ahead when Jay Fulton was dispossessed by Ryan Hedges deep in Swansea territory.

Hedges showed good composure, stepping inside Fulton's attempted recovery challenge and teeing up Szmodics to stroke Rovers into the lead from 15 yards.

Swansea almost levelled early in the second half, when Latibeaudiere centred for Piroe but his volley was parried by Thomas Kaminski.

Just as the home side found some momentum for the first time, Blackburn doubled their lead.

Swansea academy product Hedges claimed another assist for Rovers as he picked out Brereton Diaz, whose first touch took him beyond home debutant Nathan Wood.

Swansea tried to respond, with Piroe denied by Kaminski at the near post before Jamie Paterson's cross-shot was cleared from under the bar by Tayo Edun.

But any slim chance of a home revival was stamped out by a sharp Blackburn counter, with Tyrhys Dolan teeing up skipper Travis to drill in his second goal of the season.

Tayo Edun (Blackburn Rovers) wins a free kick in the defensive half.

Attempt saved. Harry Darling (Swansea City) right footed shot from more than 35 yards is saved in the top centre of the goal. Assisted by Nathan Wood.

Attempt blocked. Ryan Manning (Swansea City) left footed shot from the left side of the box is blocked.

Michael Obafemi (Swansea City) is shown the yellow card for a bad foul.

Thomas Kaminski (Blackburn Rovers) wins a free kick in the defensive half.

Attempt saved. Joël Piroe (Swansea City) right footed shot from the right side of the box is saved in the bottom right corner. Assisted by Olivier Ntcham.

Nathan Wood (Swansea City) wins a free kick in the defensive half.