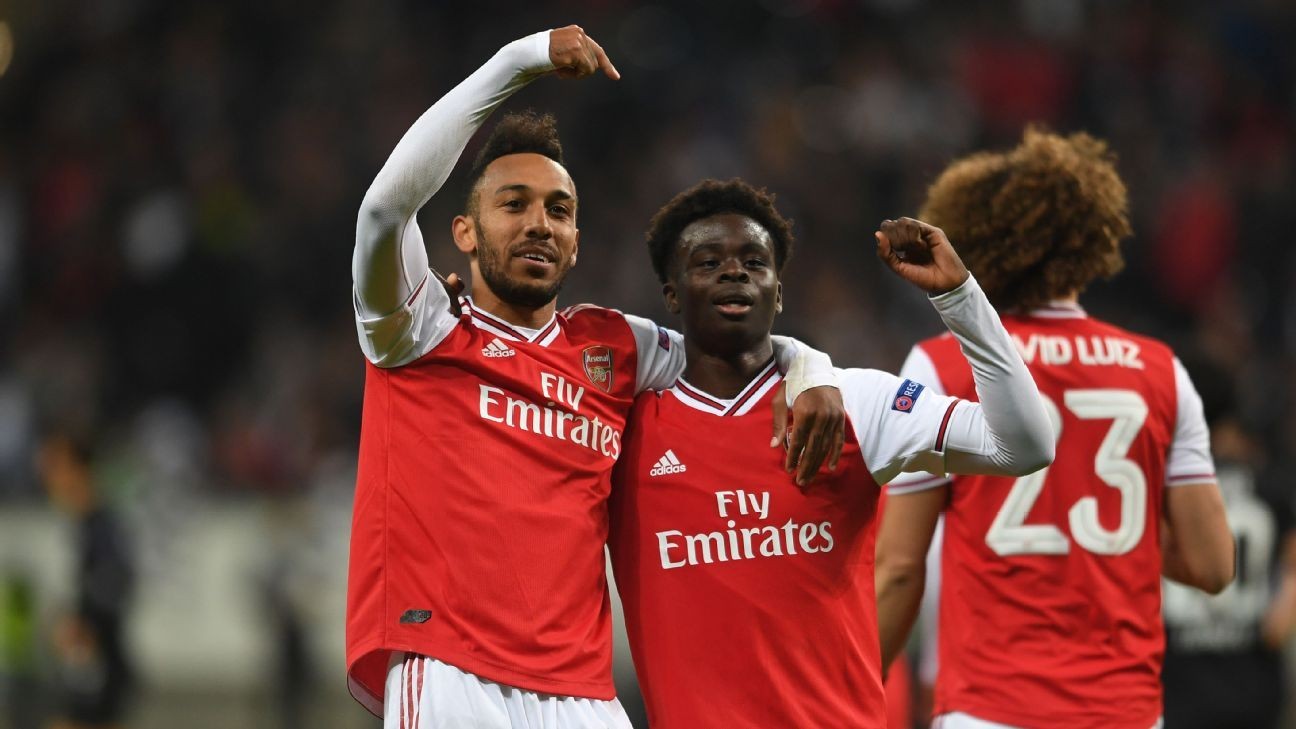 Aubameyang to turn down Europe move

All those clubs chasing Pierre-Emerick Aubameyang this summer may have to concede defeat after the Gabon international hinted he might stay at Arsenal following the Gunners' announcement that they're set to keep teammate Bukayo Saka, reports the Evening Standard.

The north London club announced that Saka had signed a new four-year deal before the Gunners' win against Norwich City, and the news is reported to have delighted Aubameyang.

Aubameyang was on target with a double as Arsenal put four past the Canaries but his future has been very much under the spotlight in 2020. Aubameyang is in the last year of his contract and so has been widely expected to leave, with Inter Milan and Barcelona among the clubs circling for the hitman's services.

However, with Saka's signing assured, noise from the Emirates stadium from both Aubameyang and manager Mikel Arteta suggest there could be a future for him at Arsenal after all.

Now that Bukayo Saka has penned a new deal, Pierre-Emerick Aubameyang is reportedly ready to stay at Arsenal. David Price/Arsenal FC via Getty ImagesMiranda on the move after return from Schalke

Barcelona are looking for suitors for youngster Juan Miranda following the 20-year-old's return from Schalke, according to Le10Sport.

They're reporting that the German club has announced they won't be taking up their purchase option following Miranda's loan spell at the club, while Barca themselves have also admitted they don't see the left-back in their long-term plans.

Miranda has been with the Catalan club since he was 14 but headed to Germany in an effort to get more first-team experience. He played 12 games for the Bundesliga side, but it would appear as though he hasn't done enough to earn a long-term deal.

Miranda is expected to return to Spain in the coming days but with Barca expressing no intention of keeping him, he looks set to be on the move once again this summer. Another loan deal looks most likely.

They say that the Belgian striker is set to sign for UD Almeria after having left Manchester United earlier this week. Ramazani was offered a new deal at Old Trafford but has decided to pursue his future elsewhere.

Ramazani scored nine goals in 13 appearances in Premier League 2 this season and he has been free to negotiate other clubs since his departure on Tuesday.

The 19-year old only made one first-team appearance in three years in Manchester and it is believed he is pursuing more playing time in Spain.

United were unwilling to match the player's wage demands who they didn't feel had a long-term future at the club.

UD Almeria are looking to win promotion to La Liga. They currently sit fourth in the Spanish second division.

- Antoine Griezmann's miserable spell at Barcelona continues and speculation about his future has grown with the news from La Parisien that his agent -- his sister -- is set for talks with Barca next week. Griezmann's brother and father have hit out at Barcelona coach Quique Setien on social media after the France international was only introduced as a stoppage-time substitute against Atletico Madrid midweek.

- Newcastle United are believed to have joined the race for Gremio star Everton Cebolinha. That's according to Italian outlet Area Napoli, who claim that the Magpies could be about to sign the player for €25 million. Napoli, Everton and West Bromwich Albion were also rumoured to be interested, but the player would reportedly prefer a move to the north east.

- West Ham United are looking to sign Gonzalo Montiel from River Plate, reports Sport Witness. The Hammers have already tried to tempt the 23-year-old to London and though they head the race for his signature, the player himself is waiting to see whether or not the Hammers can secure their top-flight status. It is believed Montiel would cost around £10m.