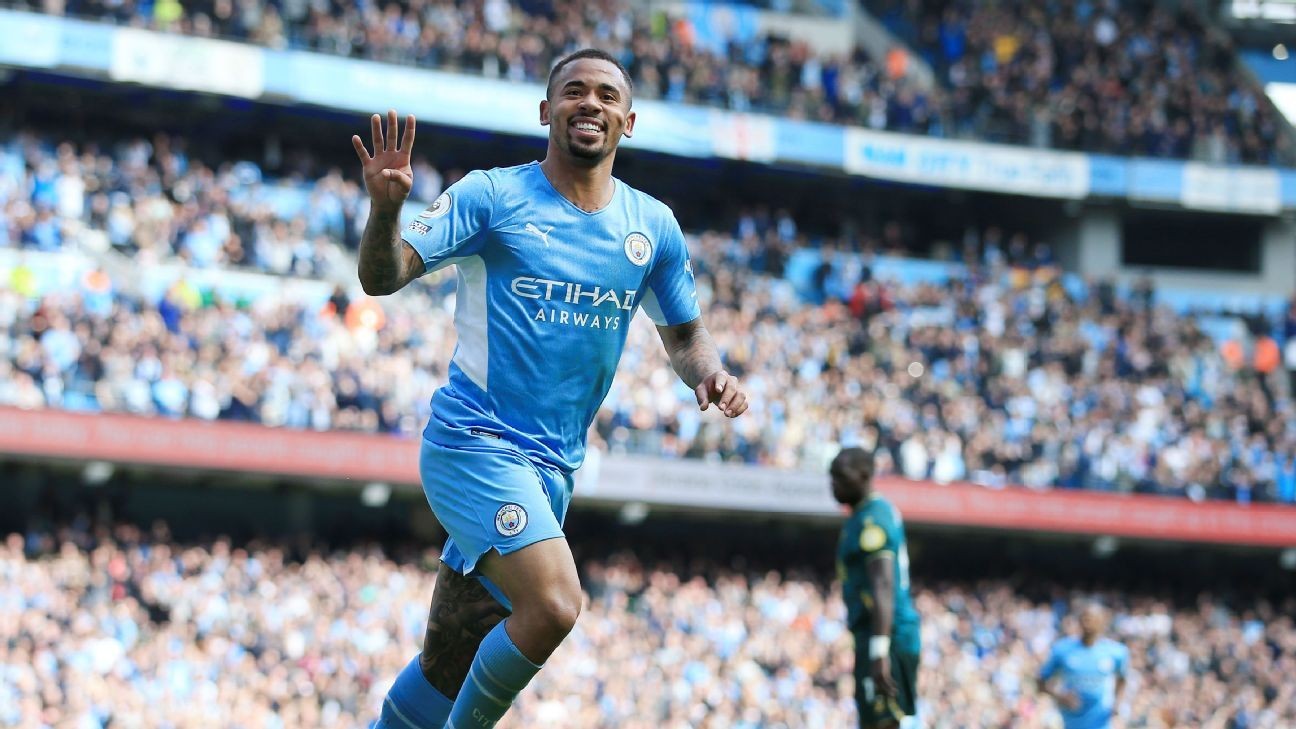 Gabriel Jesus is leaving Manchester City in a bid for more playing time, and his destination is reportedly Arsenal. Simon Stacpoole/Getty Images

Gabriel Jesus is all set to leave Manchester City and join Arsenal, according to The Athletic. The 25-year-old is reportedly set to join the Emirates for £45 million as the Gunners finalise personal terms.

The Brazilian international, who has one year remaining on his contract, will leave the Etihad after five years, where he scored 95 and assisted 46 in 236 appearances across all competitions for the Premier League Champions.

The forward worked with Mikel Arteta when he was the assistant coach to Pep Guardiola from 2016 to 2019 and has been a priority for the Spanish manager this summer transfer window.

Following the departures of Pierre-Emerick Aubameyang and Alexandre Lacazette, the move to North London will see Jesus compete with Eddie Nketiah to lead the frontline. But it was deemed a better move for Jesus because he would've had to compete with the arrivals of Erling Haaland and Julian Alvarez at Man City, meaning that remaining in Manchester would've likely resulted in a struggle for game time.

- Chelsea have offered Timo Werner to Juventus in negotiations for Matthijs De Ligt, reports Sky Sports' Gianluca Di Marzio. The 22-year-old has been identified as Thomas Tuchel's top transfer target this summer as part of a defensive rebuild following the departure of Antonio Rudiger and Andreas Christensen. However, the Bianconeri are reportedly unhappy with the cash sum offered by the Blues for the defender. The Dutch international is in in contract until 2024, which includes a release clause worth €120m.

- West Ham are close to permanently signing Alphonse Areola for £10.5m following a season-long loan from Paris Saint-Germain, reports the Sun. The Hammers are set to announce the deal next week, following the agreement of personal terms. The 29-year-old goalkeeper was mainly used as a replacement for Lukasz Fabianski in the Premier League but is reportedly set to take over the number one position next season.

- Christian Eriksen is deciding whether to join Manchester United or stay at Brentford next season, according to Sky Sports. The 30-year-old, who trained with Erik ten Hag's Ajax following his collapse at Euro 2020, has reportedly received a more lucrative offer from the Reds. However, the Denmark international has reservations about relocating his family this summer, with his contract with the Bees expiring at the end of this month.

- Newcastle United have agreed a deal with Lille for Sven Botman, reports The Athletic. The Magpies had three bids for the 22-year-old turned down in the January transfer window and the centre-back is now set to join the Premier League club for €37m including add-ons, with a medical reportedly taking place next week. The Dutch under-21 international has made 79 appearances for the French side after joining from Ajax in 2020.

- Arsenal and Tottenham are still in pursuit of Raphinha, as negotiations with Barcelona continue to stall, according to Fabrizio Romano. Leeds are asking for £65m for the 25-year-old and have already rejected the Gunners' opening offer. Although the Peacocks have received no new bids for the winger, next week is tipped to be crucial. Chelsea are also reportedly interested in the Brazilian international to play at wing-back, but the Blues consider Raheem Sterling as their priority this transfer window.