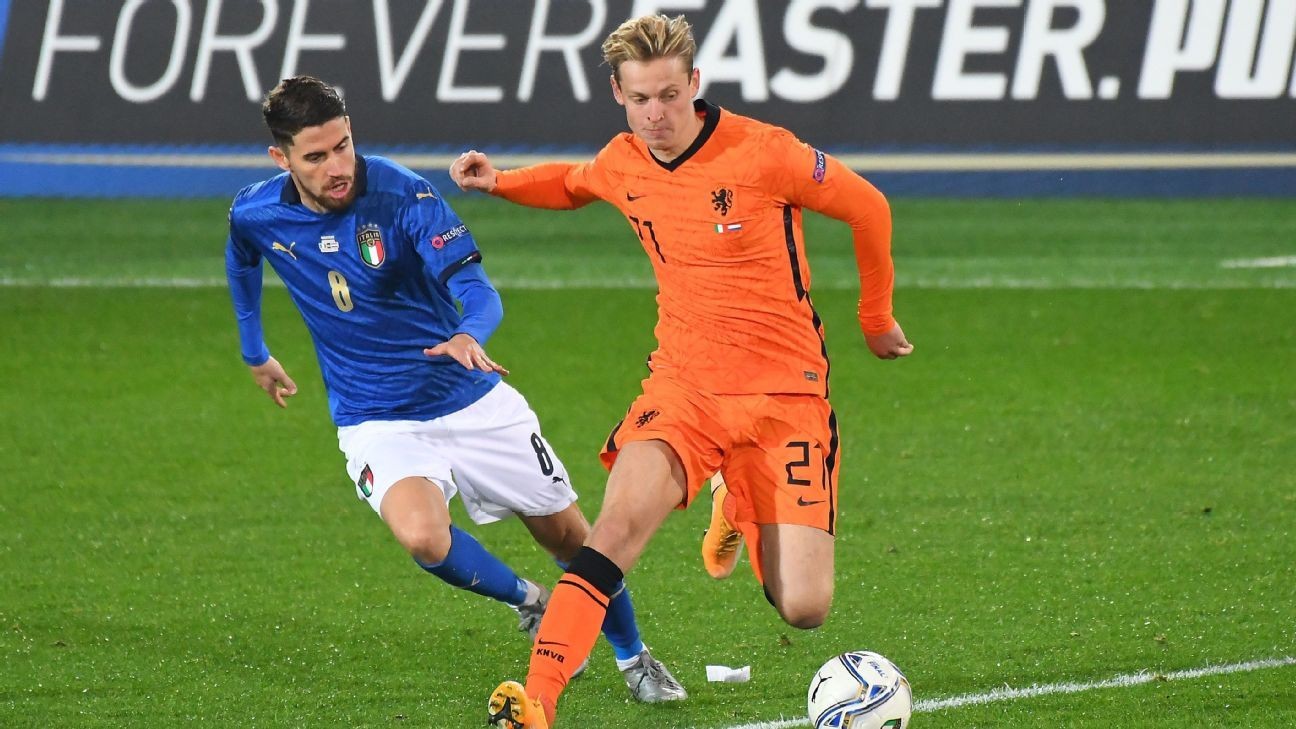 In an effort to improve their midfield, Juventus is considering a move for Jorginho, left, or Frenkie de Jong. Getty Images

With Fiorentina striker Dusan Vlahovic seemingly on the cusp of joining Juventus, the club is now said to be turning their attention to bolstering the midfield.

Which players could move before the January window closes?3dMark OgdenWhich one player should each top European club sign?8dTor-Kristian KarlsenTransfer grades: Sevilla an A- for Martial2dJon Molyneux-Carter

And, according to Gazzetta dello Sport, the Bianconeri are interested in signing either Chelsea's Jorginho or Barcelona's Frenkie de Jong at the end of the season.

Jorginho, 30, has impressed for both Chelsea and Italy over the past year, winning the Champions League, the European Championships and finishing third in the 2021 Ballon d'Or rankings.

However, he is out-of-contract at Stamford Bridge in 2023, with the player's representatives said to have already held discussions with the Old Lady hierarchy.

De Jong, 24, is reportedly another option for the Serie A side to strengthen their team in the middle of the park.

The Netherlands international has struggled with Barcelona since his switch from Ajax in 2019. As a result, the Blaugrana are said to be willing to move him on amid their well-documented financial troubles.

It could allow the Serie A side to make a move for the pivotal midfielder, though interest from Bayern Munich and Chelsea could make it tough to land him.

If the Blues do make a move for De Jong, it could further open up the possibility of Jorginho making the switch back to Serie A.

The 27-year-old only joined Verona from Udinese last summer, though the club's president is willing to move him on for €20m in what could be Spurs' first incoming in January.

- AS Roma are interested in a potential move for Paris Saint-Germain forward Mauro Icardi, reports Calciomercato.

Jose Mourinho has already added to his squad this window, signing Ainsley Maitland-Niles and Sergio Oliveira. Icardi, 28, has struggled to find his way into the PSG side and could be free to leave the club this month, adds the report.

- Liverpool have turned down approaches from Leeds United and Monaco for forward Takumi Minamino, while Atalanta have registered interest in striker Divock Origi, says the Daily Mail.

Minamino, 27, has been a squad player for the Reds since his arrival from FC Salzburg, with the report claiming a substantial offer would have to be made for them to let the Japan international leave. His Liverpool teammate Origi has also registered interest from Serie A side Atalanta, with the 26-year-old's contract expiring in the summer.

The 36-year-old is out of contract with the Villains in the summer, alerting both the Magpies and fellow relegation battlers Watford. Despite a reported offer from Newcastle, the former England international has turned down the chance to transfer there.

The 24-year-old is one-year into an 18-month loan spell at the Eagles from Bundesliga club Mainz, who have reportedly set a valuation of £14 million for the forward.