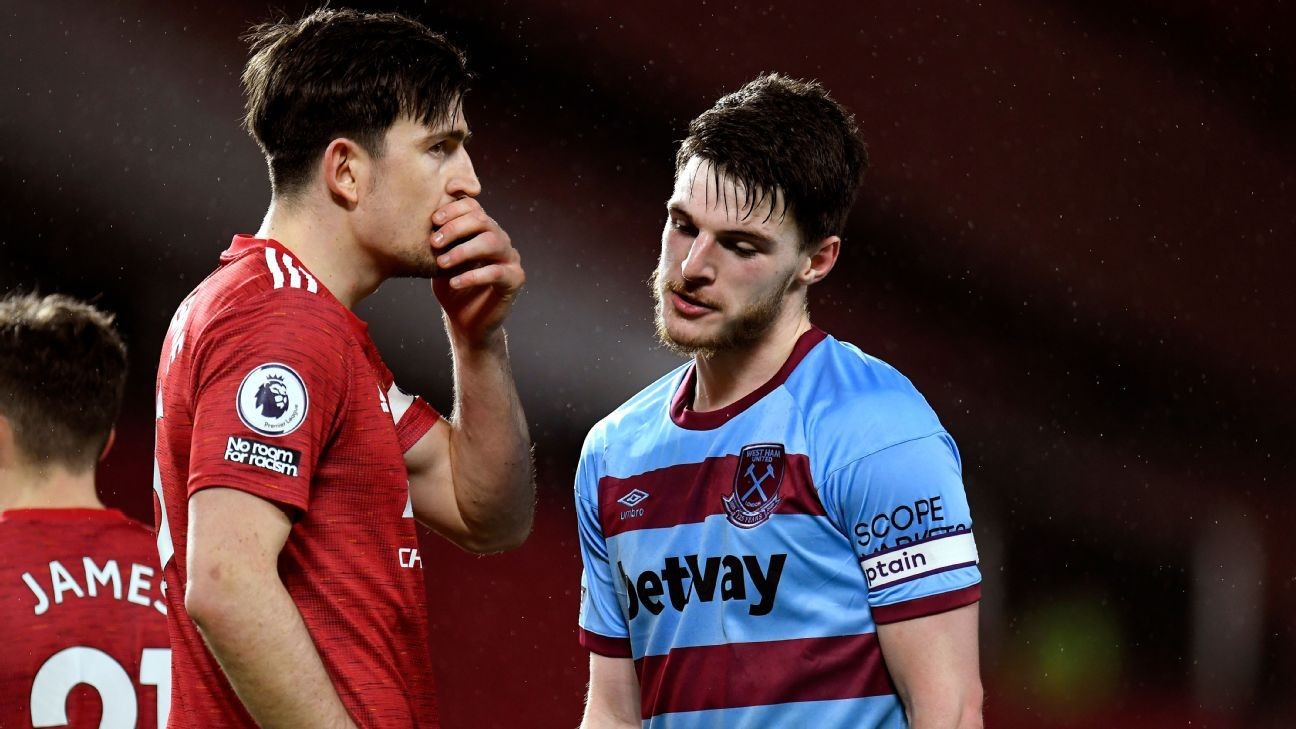 The January transfer window may seem like a distant memory, but that doesn't mean the rumour mill has shut down! Speculation over summer moves is heating up, so check out the latest gossip below, and see all official deals here.

Declan Rice has spoken to England teammates Harry Maguire and Luke Shaw about Manchester United ahead of a possible switch from West Ham in the summer, according to the Manchester Evening News.

Can Dortmund keep their young stars this summer?Messi to PSG among five transfers we want to happen this summerAssessing Ronaldo's next move: Man United, Real Madrid, MLS or stay at Juve?

Dean Henderson and Marcus Rashford were also part of the most recent England setup from the Manchester United squad, but the 22-year-old spoke specifically to Maguire and Shaw about the club.

The defensive midfielder has reportedly been on United's radar for over two years as they search for a young holding mid to bolster their ranks and relationships within the England squad. Additionally, with midfielder Jesse Lingard currently on loan at Rice's West Ham, the Red Devils' bargaining power is even further enhanced.

Rice still has three years left on his current deal and should West Ham manage to qualify for the Champions League going into next season, the Hammers may be able to price Ole Gunnar Solskjaer out of a move.

Since bursting onto the scene in 2017, the London-born Rice's stock has only risen, with manager David Moyes claiming he could return a fee of over £100 million.

Former Chelsea boss Frank Lampard was also an admirer of the young England international, making attempts to sign Rice, who the Blues released at 14 years old.

- Barcelona are hopeful of sealing a deal for Manchester City defender Eric Garcia by the end of the month, reports Spanish outlet Sport. The report claims Barca are confident of reaching an agreement with the 20-year-old, who is out of contract at the end of the summer. Garcia is said to want a return to the Camp Nou following his exit to City back in 2017.

- Juventus are looking to re-sign forward Moise Kean -- currently on loan at Paris Saint-Germain -- from Everton in the summer, according to Gazzetta dello Sport. The 21-year-old signed for the Toffees from Juventus for £27.5m back in 2019 and although he hasn't made his mark on Merseyside, his 16 goals in 33 for PSG on loan has caught the eye of his former club. The report adds that Juventus midfielder Adrien Rabiot and defender Merih Demiral could also be involved in a deal to tempt Carlo Ancelotti into agreeing terms.

- Internazionale are looking to bolster their defence this summer and may turn to former academy graduate Zinho Vanheusden. Calciomercato reports that the Serie A leaders are looking for reinforcements in that area with Andrea Ranocchia and Aleksandar Kolarov likely to leave.

- Bayern Munich are confident they can land Erling Haaland next summer if the striker stays at Borussia Dortmund. The Daily Mail reports that Bayern believe they can win the race if the 20-year-old stays due to his release clause of £65m in 2022. It is a move that could be made as a long-term replacement for 33-year-old Robert Lewandowski. However, the German outfit face competition from suitors across the world, with offers in excess of £100m expected to be made.

- Barcelona are in talks with Sergio Aguero's agent about a possible move to Spain, according to Fabrizio Romano. The 32-year-old striker is set to leave Manchester City once his contract expires this summer following 10 trophy-filled years at the club. Barcelona are looking at the Argentine as a striking option due to a lack of depth up front after letting Luis Suarez leave for Atletico Madrid last summer. Currently, Martin Braithwaite, Antoine Griezmann and Lionel Messi are their talented -- but limited -- options in that role.